After I posted my first sourdough Mazanec and Vanocka, I heard from many European bakers on IG who love these breads and they said that they eat them year round that’s how much they are loved.  We leave for Florida in a couple of days, unless we are delayed by the newly forming tropical storm, so I needed to bake another Christmas present, this time for the staff of our building.  With the feedback from the first bake, I decided to make some adjustments to Maurizio Leo’s recipe.  I wanted to use a stiff sweet lEvian with the idea of reducing the sour tang while also hopefully making a levain with more osmotolerant yeast selected for.  I increased the lemon zest to enhance the lemon flavour while also adding some candied mixed peel for a bit of variety to the inclusions. 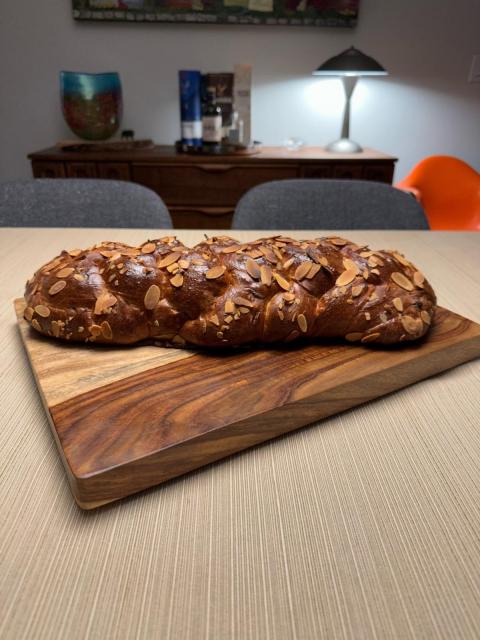 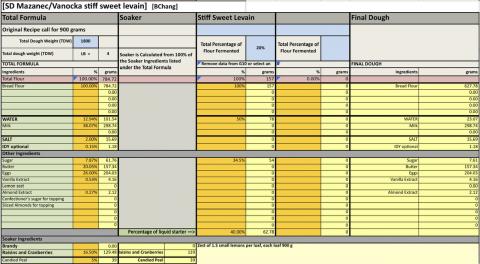 This formula is for two loaves.

Make the levain and soak the raisins and cranberries the night before.

In the evening, when your sourdough starter is ripe (when you’d typically give it a refreshment), make the levain. In a large jar, combine bread flour, water, ripe sourdough starter, and sugar. Cover the jar loosely and let the levain ripen overnight at warm room temperature (I keep mine around 74°F to 76°F/23°C to 24°C). In a small bowl, combine the raisins/cranberries and brandy (use enough brandy so they’re just covered). Cover the bowl.

In the morning, about 12 hours later, your starter should be bubbly on top and at the sides, have risen in the jar, have a sour aroma, and have a loose consistency. If it was cold in your kitchen overnight or it isn’t displaying these signs, give it one more hour to rise and check again.  Drain the brandy soaked fruit.

Cut butter into small pieces, place them on a plate, and set them inside the proofing box set to 82*F to become very soft. To the bowl of a stand mixer fitted with the dough hook attachment, add the flour, milk, eggs, sugar, salt, vanilla extract, almond extract (if using), lemon zest, and the ripe levain. Set the mixer to low speed and mix until all the ingredients are combined and no dry bits of flour remain. Turn up the mixer to medium-low and mix for 3 to 5 minutes, until the dough starts to clump around the dough hook. This is a moderately strong dough at this point, and should mostly pull away from the bottom of the mixing bowl.

Let the dough rest 10 minutes in the mixing bowl, uncovered.

The butter should be at room temperature by this time (meaning a finger should easily push into a piece with little resistance). If you used the paddle to mix, switch back to the dough hook, and with the mixer turned on to low speed, add the butter, one piece at a time, waiting to add the next until the previous is incorporated, 4 to 6 minutes total. Once all of the butter is added, turn the mixer up to medium-low and continue to mix until the dough smooths and once again begins clinging to the dough hook, 2 to 3 minutes. The dough will be cohesive, smooth, and elastic at the end of mixing.  Add the drained fruit and mixed peel.  Mix until well incorporated.

Transfer the dough to another large container (or leave it in the mixing bowl) for bulk fermentation.

Cover the dough with a reusable airtight cover and let it rise at 82°F  for a total of 2-4 hours. During this time, you’ll give the dough one set of “stretches and folds” to give it additional strength.

Finally, let the dough rest, covered, for the remaining 3 hours of bulk fermentation.

Check your dough; after 2-4 hours, it should have risen about 10-20%  in the bulk fermentation container, have a few scattered bubbles, be smoother with a slightly domed top, and be moderately light and fluffy to the touch. If the dough still looks sluggish or feels dense after 4 hours, give it another 30 minutes to rise.

For shaping Vanocka, divide dough into six equal portions.  Pre-shape as a boule.  To form each piece into a strand about 14” long. On an un-floured board, flatten each piece with the palm of your hand. Using a rolling pin, roll out each piece to about ¼ inch thickness. Then roll up each piece into a tight tube. Using the palms of your hands, lengthen each piece by rolling each tube back and forth on the bench with light pressure. Start with your hands together in the middle of the tube and, as you roll it, move your hands gradually outward. Taper the ends of the tube by rotating your wrists slightly so that the thumb side of your hand is slightly elevated, as you near the ends of the tube.)

Braid the loaf.  Braiding somewhat loosely, not too tight. 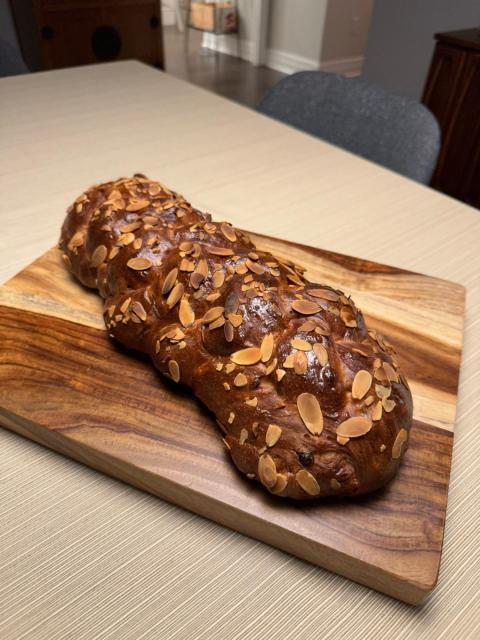 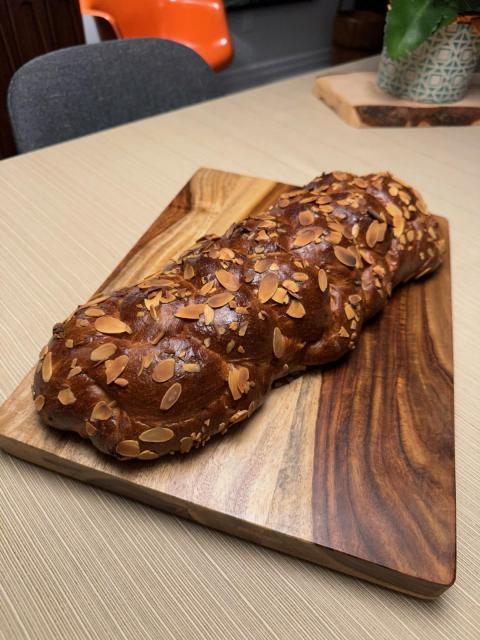 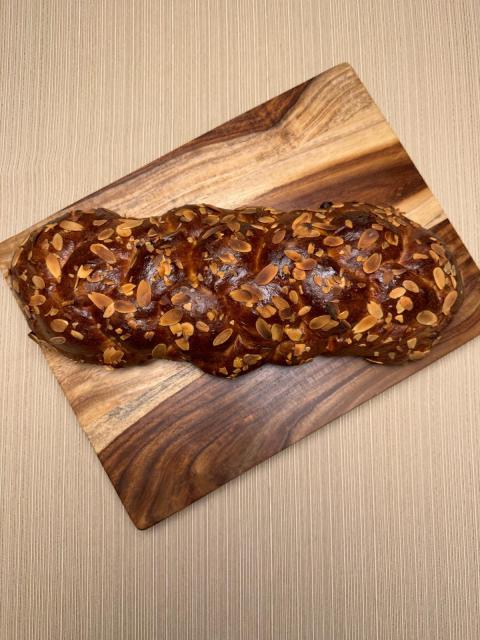 I think I’m getting a bit of a handle on how to use my new Ankarsrum Assistent.  It makes “dissolving” a stiff levain into the liquid components of the formula really easy.  Although many videos say to add the dry ingredients gradually or in at least two steps, I’ve found that I can add them all at once without any issue.  To get the butter incorporated easily and quickly one has to get the butter very very soft, softer than room temperature in a Canadian home in the fall.  So I’ve been cutting the pats of butter and placing them in my proofing box set at 82°F.  This works well.  Adding inclusions is a breeze with the Ankarsrum Assistent, much better than with my old KA artisan.

Anyhow, here’s a quick video of the Ankarsrum Assistent at work.

The braiding was well done and the instructions were explained in an easy to understand manner. The mixer looks like it develops gluten in a gentle way. I can only assume that it cleans the bowl at the end of the kneading process. Having access to the entire bowl is a nice feature and playing with the roller and scraper looks like fun. If my Bosch ever quits i would get one.

I have found that if I go in with my silicone spatula while the bowl is spinning I can easily clean the bowl.  I’m pretty happy with the Ank so far now that I’ve used it a bit.  I have six weeks away from it while in Florida where, if I bake I’ll be back to doing everything by hand.  Good to practice that for a while as well.

Here’s how I do the fun six strand plait.

I enjoyed the videos. Both very informative. Glad you're getting used to the  Ank. Looks like a very nice machine.

Thank you very much Dave, glad you enjoyed the videos.  Yes I am gradually getting used to the Ankarsrum Assistent and learning how to use it to its best abilities.  My mixing times are no longer greater than with the KA artisan as they were initially.  Always a learning curve with new equipment but it’s worth it.

Glad to hear you’re getting a level of comfort with the Ank!

It looks like you’re getting a level of comfort with the vanocka dough too.  That looks perfectly proofed and baked!  A great gift for the staff.

Thank you Troy, based on more feedback from the staff, I’d still increase the lemon zest and increase the fruit even more.  I guess people like more brandy soaked fruit in their Christmas bread.

You’re very welcome, I only got the butter soft enough after two previous attempts at autumn room temperature butter not incorporating.  I’m glad to share these little things as I myself learn them from others or by experience.

Your loaf is gorgeous and sounds delicious!