Just throwing this out for those that may want to consider this.

Many of my so called “Facts” and commonly accepted beliefs are wrong. This I know for a fact. The problems is, I don’t know which of those are incorrect. Thus I consider myself an “eternal student”…

It is commonly accepted that bran, sharp sided seeds, and other large particles will tear the gluten. Because of this we are very careful to handle these types of dough with kid gloves.

Years ago Debra told me that it wasn’t the large particles or sharp sided edges that tore the gluten network. She told me that large particles thwart the adhesion of the gluten network (matrix or layers). At least that’s how I remember and understood it. Since I trust Debra’s thinking, I started doing the unthinkable. I kneaded the doughs with these types of particles whenever desired with no regard for damaged gluten.

The following Hamelman’s Five-Grain Levain is shown below. Keep in mind that it contains 25% home milled wheat that was ground with a single pass and used in the dough at 100% extraction. It also contains 35% of various seeds. The dough was mixed ~20 minutes using a Famag spiral type mixer.

In the past I shied away from highly developed doughs. At that time I wanted to produce a crumb that was open. This is no longer a goal of mine. Also, when a dough is subjected to intense handling and/or kneading it will oxidize and have a negative affect on the flavor. But for my taste, oxidation is acceptable when making breads with inclusions since they enhance the flavor a great deal. When baking lean doughs without addins, such as baguettes, intense kneading will produce bland breads. IMO.

Danny
“always willing and excited to learn something new”

Who knows. Maybe the ideas above will need refining or even be debunked. (Is Doc reading this?) LOL

I've always called "Bah-Humbug" on that one. ALL bread needs to have well developed starch and gluten so the seeds,bran,etc can be held in a cohesive suspension. Heavily seeded breads ESPECIALLY need to have a well- developed matrix to hold the seeds in place.

I also believe that the ratio of matrix to seeds is important. If there are too many seeds and bits and not enough matrix,then it will not hold together. Look what happens if you mix too many stones into a concrete mix- it will fall apart when it dries/cures-not enough holding power. Same with bread and exactly what Debra said-it thwarts the binding capacity.

So knead those whole grain and seeded loaves well!

It wasn't on this point about bran tearing gluten but he said not to worry about tearing the gluten as it'll knit itself back together again.

I had heard this notion about bran tearing gluten but I was always of the opinion that it interfered with the gluten network.

If kneading dough with a food processor works, how could rough edged particles damage the gluten network?

I often knead my seeded doughs fully, although those doughs will never be as strong as a white flour dough. It is reasonable to conclude that the tiny “peebles” interfere with the adhesion of the individual layers of gluten. There may be other factors at work and if so I’d like to learn about them.

If I take a lb of KA bread flour and start adding rye flour, eventually the low gluten rye flower will displace enough of the bread flour to effect gluten development. Perhaps it is as simple as dilution? Another possibility, acid buffering of bran, water absorbency etc.. that reduces the chemical efficiency of gluten development in addition to dilution.

Very nice crumb Danny.  You said 20 min mixing in your Famag, but you didn't specify at what speed or dough temperature or hydration. I find that to get well developed gluten in my Famag IM5 I need to start somewhere around 60% hydration and after combining ingredients and an autolyse and low speed incorporation of the salt it takes at least 5 minutes at speed 5 to get to a point where I can incorporate the rest of the liquid with a long bassinage at speed 2.  That is where I spend 20 minutes raising the hydration from 60% to 70% or higher (usually using ice to keep the dough temperature down).

Mostly speed 4 but approximately 5 minutes at speed 6. I am not methodical these days. I often go by sight and feel.

After baking Jeff’s bread (5 Grain) over the years the process has been modified for simplicity and ease. For me it is completely dialed in for my needs. The formula is followed exactly as written, with the exception of seeds and cracked rye. The 34% seeds remains the same but the actual make up varies according to what I have.

It is an easy process even though the total time from start to finish is 2.5 days. The bread is completely consistent. OH! I often reduce the bassinage water. My doughs have a tendency to be wet. I think our high humidity causes this.

Oxidation - what is the end effect of this?  Exposure to oxygen is easy to understand, and broad.  What are the terminal products of oxidation in bread (as described above), as it comes out of the oven?

I've read that kneading increases oxidation. In more than one instance, I've read authors who have suggested it as an alternative to chemical oxidizers in commercial flours for home-ground flour.

Not sure about the technical explanation for oxidation that is caused by extensive kneading, but I know by experience that it has a negative affect on favor. For instance. I love the flavor of T65 French flour for baguettes. But  since it is a lean dough with no addins, the signature flavor will be destroyed by too much kneading. Whereas doughs with a fare amount of addins are able to withstand intense kneading and still taste fantastic, IMO.

For a technical answer to over oxidized dough, Michael Wilson is best suited for a definitive answer.

I love Hamelman's 5-grain levain and bake it frequently. You have achieved a great result with a nice crumb that looks like it has been shaped perfectly.  I mix by hand and have not experienced gluten tearing issues. Like you, I stone mill the 25% wheat the day before baking. I bake it free-form on stone. This pic is one I baked a while ago. 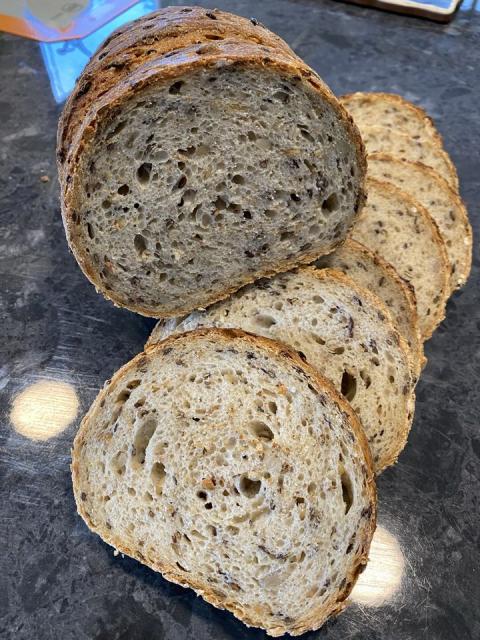