Sprouted Rye Bread without a scale, measure or recipe

Sprouted Rye Bread without a scale, measure or recipe

I love a good recipe to follow as much as the next person, but there was a time when bread wasn't made that way. It was made with markers based on our senses of touch, taste, smell and sight.

As anyone who has read one of my posts in the past knows, I like to bake rye/wheat blended bread. I have a small library of books with recipes (some work, some don't) and procedures for making a specific loaf.

I've got a loaf fermenting in my oven right now. I don't know what the hydration, flour/ratio, or anything else might be. I started (last night) with an empty mixing bowl and just started adding things till it felt and tasted right this morning.

This got me thinking that I'm not alone; there must be others out there that (even if it's not every bake) bake by feel without a scale or measuring cup.

To start things off, I will give my (non)recipe for making the bread I'm working on now.

My challenge to the community is to offer your own (non)recipes for others to learn how to use their senses when making bread.

I had made greek yogurt the day before, so I had whey. I poured the whey into a mixing bowl (less than a quart, more than a pint) and added first clear flour and sprouted rye flour till it formed into a batter. Covered it and left it to sit overnight.

In the morning, I took a bowl scrapper and did a window pane test - it failed (as I expected) as it formed the pane it broke apart from the lack of gluten and overhydration. I put the batter into my KitchenAid mixer and added salt ( a little over a teaspoon) and quick yeast. mixed enough to incorporate, then I added a handful of first clear flour followed by a handful of sprouted rye flour. mixed and let it sit for a bit to hydrate. I did this about three times until the dough started to pull away from the side of the mixer and formed a dough. I covered the dough and let it rise for about an hour. Next, I put some olive oil down on a plastic sheet I used to roll out pastry and dumped the dough out onto the oiled sheet. The dough was silky and slightly sticky, so with a dough scraper and oiled hands, I folded the dough over onto itself into a boul for another 45 minutes. From there, I dumped it into a loaf pan without shaping for 1/2 hour, until it cleared the shoulders of the pan and put it into the oven.

I know when it is done by the smell. When the house starts to smell like bread it's at or near the end, so I take a look. I like a dark crust so I'll let it go longer if the crust isn't as dark as I'd like. Best guess is about 30% rye. Nice chewy crumb.

So, how do you make your freeform bread? 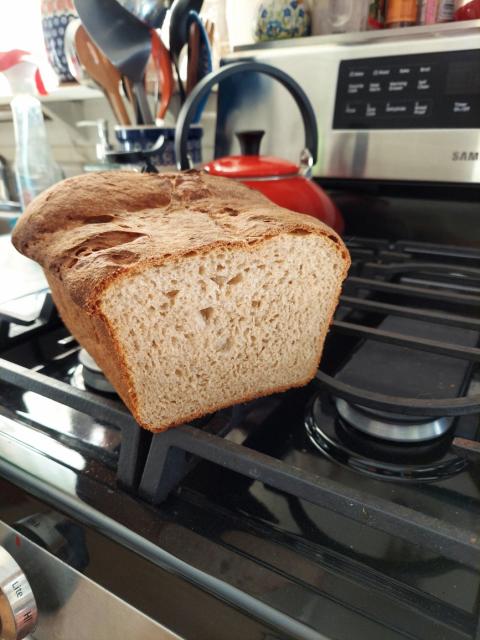