I’ve had this loaf on my list to bake for sometime.  I’m still not sure that I love high percentage rye breads, this one is 59%, but wanted to try a different recipe to find out.

Daniel’s description of this bread from the book:  “ There aren’t many bakers who continue to follow the tradition of building a rye sour in several stages. Josef Hinkel organizes his bakery around a mixing room where he has large mixing bowls of sauerteig at different stages of development. It’s hard to tell from looking, but the bakers know exactly which bowl is ready at which moment. Because the bowls are all open, the air is thick with the powerful, pungent aroma.

This particular bread is Hinkel’s go-to everyday loaf. He makes hundreds of them a day, selling them exclusively at his two shops, both on the same busy shopping street in Dusseldorf. For people who are new to 100 percent rye breads, this is a great gateway recipe.”

Rye 59% overall not including Altus.

I think that the instant yeast is too much, the first proof only took 30 mins rather than the 1.5 hours that the author (Daniel Leader) suggested.  Perhaps reduce to 4 g

I questioned the huge amount of instant yeast, but I followed the quantities of all the ingredients since I try to follow most recipes the first time I try them.  In the end, this dough fermented much more quickly than described in the recipe so if I try this recipe again, I’d reduce the instant yeast by ⅔. 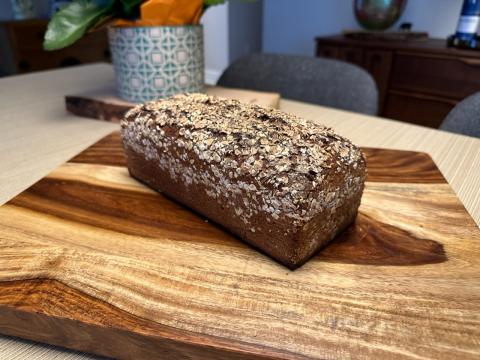 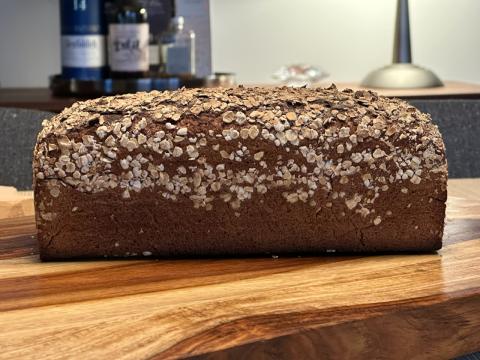 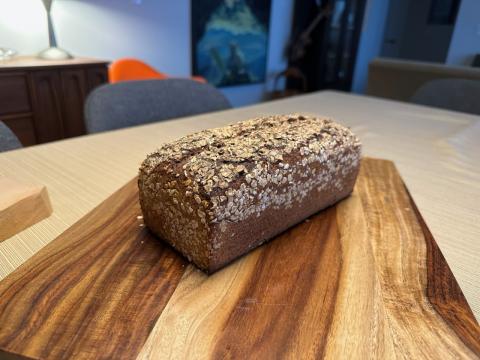 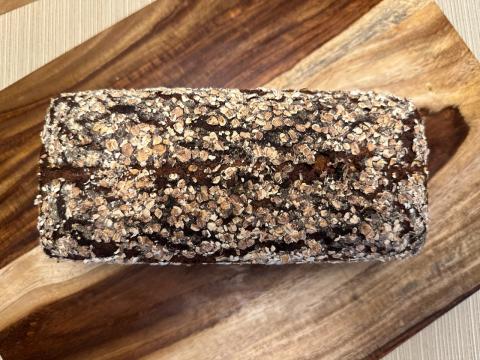 I suspect that my dough over fermented.  The dough practically grew before my eyes when it was placed in the pan.  I couldn’t get the oven heated fast enough and even had to refrigerate the dough until the oven was ready.  The dough actually didn’t grow in the oven, it actually lost a bit of height.

I have also experienced this with Leader's Living Bread book; he often uses really excessive quantities of yeast in the recipes. I can't imagine Herr Hinkel using what appears to be 2.25% idy (based on overall flour content excl altus).

I'm not sure why Leader has done this and I don't know if it applies to his earlier book(s). Also, in a Roggenmischbrot, the prefermented rye should be 40-50% of total rye. This recipe has 60%, which isn't quite right.

Although I own the book, I can't say I bake out of it anymore - I'd rather get my German rye recipes from Homebaking.at, Brotdoc or Lutz.

Thanks for the feedback Lance, interesting observations about Leader.  This salt in this recipe is also very high at 2.8%.  It will be interesting tomorrow when I slice this and eat it.

I just bought the book a couple weeks ago because I was drawn in by the beautiful ryes. Were there any recipes you really liked?

What was the dough like after kneading it for 12 minutes? I don't think you over proofed. Your bread looks great.

Thank you Ron.  The dough looked as I expected for a 59% rye dough, it had some body, but wasn’t like a strong tacky dough.

The loaf looks good Benny!  Interesting on Leader's book and the comments from Lance.  I was going to buy it this week as well.

Curious how it tastes because it looks very appetizing!

The book is a nice read, but having now baked from it a couple of times, there seem to be some things in it like this recipe that are odd.  You might consider borrowing it from the library and reading through it before you commit to buying it unless it is on sale at the moment.

I’ll slice it later today and will post comments then.

Overall this isn’t too bad.  I don’t mind the flavour, I am getting more convinced that a mostly rye bread isn’t to my liking.  Having said that, there are still many styles of rye breads that I haven’t bad.  I do think it over fermented somewhat.  The crumb is denser than I would have expected and the fact that the baked loaf is shorter than it was before it went in the oven fits with that.  This might deserve another bake at some point but with maybe only ¼-⅓ the IDY. 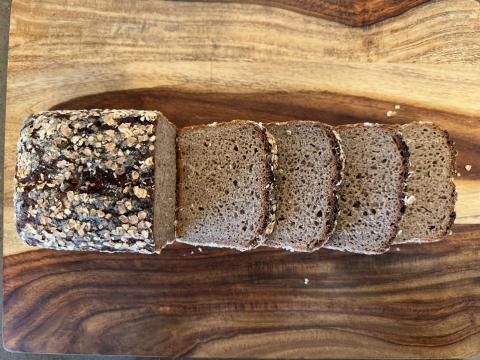 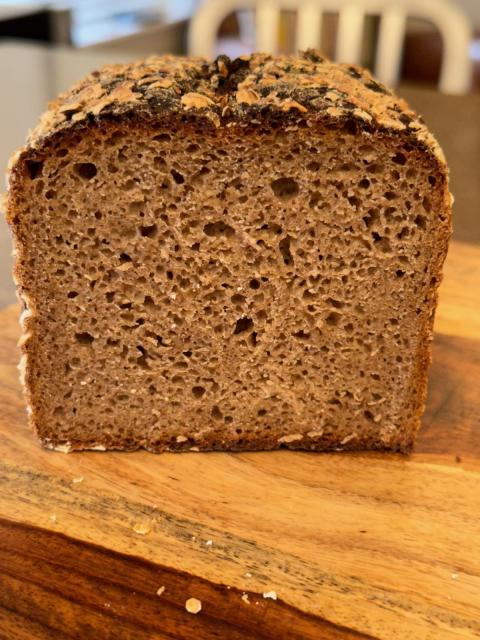 I think it looks nice! If overfermented, then only a little - because bubbles on top are larger then below, looks like they starter merging and moving upwards, but still a nice crumb.

And I agree re yeast, that's way too much. I think it would even be too much if it was fresh yeast, doesn't make sense. If adding yeast in this kind of bread maybe I'd add just like 1-2 g IDY to speed up the final rise a little. It should rise quite quickly even without the yeast tbh, not really necessary.

Thanks for the feedback Ilya, much appreciated.

with under-fermented rye. I’ve found (in my bakes) that another 10 minutes or so proofing and they even out. But I wouldn’t quibble with the very small difference here.

Looks perfect to me.

Thank you Ron, I think the recipe needs to greatly reduce the IDY or eliminate it.  The two stage rye levain was really raring to go so I suspect it would have been fine without the yeast or with just a small amount.

Before you completely swear off high% ryes, you might want to try the Normandy Apple Cider Rye from Stanley Ginsberg. It's reprinted from The Rye Baker here:

I was surprised at the depth of flavor in this bread despite not having any pre-fermented sponge(s).

Thank you Jeff, unfortunately my partner so far has only enjoyed low rye breads up to 30%.  It seems once it goes over 30% he cannot stand them.  I’ll have a look at that recommendation though, at the very least the apple cider should make it interesting!