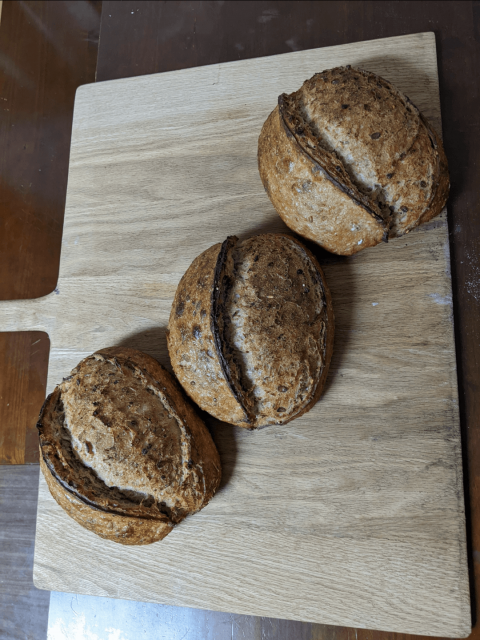 I was inspired a few weeks ago by Maurizio's Brown Rice and Sesame recipe to make a multi-grain sourdough using various cooked grains as a porridge addition. After thinking about it for a while, I finally got a hold of all the ingredients that I needed last week and threw together the dough yesterday morning and baked this morning.

To make the porridge, I boiled 50g each cracked hard white wheat, steel cut oats, brown rice, pearled barley, and polenta in 3 cups of water with a few grams of salt for 10 minutes, then spread it out on a baking sheet to cool. I made the porridge ahead of time and stored it in the fridge, then microwaved it up to approximately room temp before mixing up the dough.

I forgot to make a levain specifically for this dough the night before, so I just used my slightly overripe starter. I was also thinking about including whole wheat flour, but I didn't have time to grind in the morning (I was already losing workout time with my wife to mix up the dough).

60% hydration (60.2% if you count the starter) is lower than I typically use, but I didn't want the porridge to overwhelm the dough with all it's water. Total hydration with the porridge ended up being about 86%, and after shaping I definitely wouldn't have wanted it any higher than that.

I mixed all the dough ingredients together and let them rest for 1 hour before mixing the porridge. After mixing in the porridge, I did 3 stretch and folds 30 minutes apart, then left for work and let it bulk ferment at room temp.

After work, I split the dough into three balls and shaped them into batards. At 800g, these are a litttle smaller than my typical batards (900-950g), but I cared more about keeping the total flour at 1000g for this first test than getting a specific amount of dough in the end.

I'll post crumb after work when I can cut into one of them, but I'm very pleased with the oven spring and crust color on these. When we moved 3 months ago we got a gas oven after doing all my baking in electric. There has been a learning curve, but I've just about dialed in the settings I need to get my bread the way I want it in this oven.

Here's the crumb and another shot of the crust with better lighting. 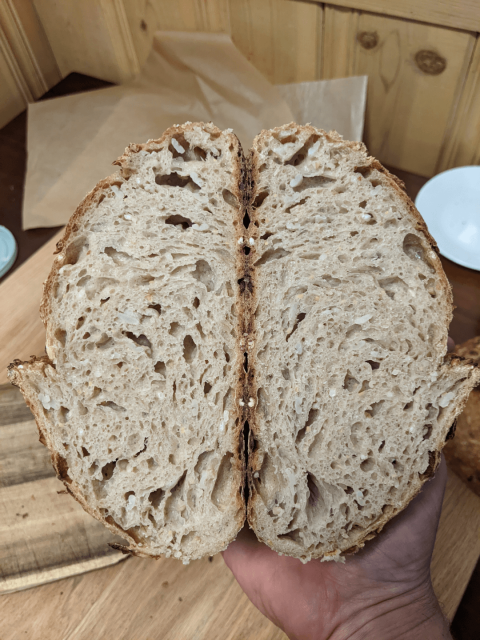 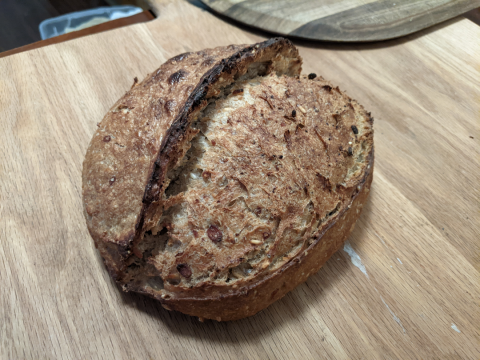 Those look great, the pics are literally making my mouth water. Nice work.

Beautiful loaves!  I like the combination of grains in your porridge but also the spelt/rye combo in your dough!

Getting the final dough hydration right to account for the porridge contribution can be tricky, but it looks like you nailed it.  Well done!

Thanks! It tastes great, but this was my first time using spelt so I'm not sure how it contributed to the flavor. I guess I'll have to make some more bread with spelt to find out.

Perfect crumb and I bet this one tastes as good as it looks.  I love making porridge breads as rpthere are so many combinations you can try for the grains and even the liquid you use.  Try using heavy cream for the porridge liquid and you will be amazed how it changes the flavor profile in a good way.

Oh that sounds incredible! I was worried that the different grains would cook at a different rate and cause a problem, but even though the brown rice is a little al dente, it still works really well, especially as toast.

You have inspired me to make this.

I feel nervous because I only usually make plain white loaves or maybe with some rye added so this is very off-piste for me.

Can I clarify, how long did you prove the batards for before baking?

Also, did you get that wonderful spring using steam?

And I'm wondering about the porridge. I'm imagining the amount of water you use in the porridge is very important or is it the amount of time you cook it for? What should I be looking for in the porridge? Should I be making sure all the moisture is taken up? or is it more essential to make sure the grains are cooked through? Or should they be al dente so that the baking helps cook them?

Again a question with the porridge. Do you think I can use any number of grains? Did you choose your combination based on taste or texture or both. Eg, does the polenta help hold the porridge together and the cracked wheat add crunch?

Apologies for all the questions but you've got my brain whirring!

They proofed overnight in the refrigerator. I don't remember the exact schedule, but it was probably 12-14 hours.

I did use steam. I had a baking steel made to almost fill my oven so that I can bake up to 4 loaves at a time. I have an old (cracked) cast iron combo cooker lid on the lower rack filled with lava rocks that I pour water on through a funnel to create steam at the beginning of my bake. Since I have a gas oven I have to turn it off to steam since it probably isn't safe to close the exhaust vent with the flames on.

I eyeballed the water and the cooking time for the porridge since this was my first time making it. The 250g of total grains in the porridge filled about 1.5 cups of volume, and the average water:grain ratio for the grains I was using was 2:1 (volume) so I used 3 cups of water. The cooking time for brown rice on the bag was 40-45 minutes, but the polenta alone cooks up in 5 minutes. The brown rice was still pretty al dente after simmering for 10 minutes, but everything else looked well cooked. After cooling, the total porridge weight was 730g.

I picked the grains I did because I wanted there to be 7 different grains in the bread, and I wanted them to actually be grains (no sesame or sunflower seeds, etc.). I don't like millet, so I just picked what was available to me. You could pick any number of grains or just one to do a porridge bread. I've seen recipes for oatmeal porridge bread and polenta bread, in addition to the brown rice sesame bread from Maurizio that inspired my own bake.

I'd never even heard of porridge bread. I just love the idea of using these seeds, oats etc because I buy them and they just sit in tupperware for years.

Another question. Seeing as the dough is so hydrated, did you use a banneton for the proving? I imagine the bread doesn't develop so much gluten and structure and if you do it freeform it'll be flat as a pancake before it goes in the oven. Am I right in thinking that or do you somehow manage to develop lots of structure so the shape holds?

Yes, I use a banneton to proof. The dough was a little bit stickier than most of the bread that I make, but it wasn't much slacker. I don't think any of my breads at 70-75% hydration could hold their shape during proof without a banneton.

Apologies but I just wanted to check, the porridge I have made has cooled and is pretty solid.

I know you say bring it back up to room temp but it doesn't feel hydrated at all right now.

I wonder if it could be the different mixture (more polenta, some linseeds, cracked wheat).

Anyway, I'm wondering how I gauge the hydration because right now it resembles a 50% hydrated dough or maybe lower. Any thoughts gratefully received.

The best measure for how much water is in the porridge is the final weight. Assuming the amount you lost while transferring from one container to another is minimal, you can assume the dry ingredients you put in are all there and the rest is water. It's going to be pretty stiff because the cooked starch absorbs much more water and creates much more viscosity than uncooked starch. Even though it feels very stiff now, if it does have as much water as mine did (about 200% hydration) then some of that water will migrate into the dough and increase the hydration.

Sorry for the late response, yesterday was a crazy day involving running through one of America's worst airports.

I should have worked it out myself, it's so simple when you think about it.

I went ahead and guessed. The dough is behaving well right now. It feels about 80% hydrated which is a little much for a man of my limited talents.

But let's see what happens. I'll post a pic up when it's done tomorrow.

Cheers for the link, I'll take a squizz.

So for a first try I'm not too disappointed and the loaves taste amazing.

I have nowhere near got that amazing spring and ears you get. How do you do that? It evades me almost always even though I build good structure into the dough and also have an oven that injects steam. I'd love any tips.

I do wonder whether I take too long in the bulk ferment? I always spend longer than the recipe says doing loads of stretch and folds and I wonder whether there's not enough active bacteria by the time I come to bake. Any thoughts gratefully received.

Anyway, I'm not disappointed with the wonderful taste and decent crumb so thank you. A whole new thing to me this 'porridge bread'.

ps I also knocked up a sourdough focaccia at the same and that came up lovely so I'm posting it with pride!

It could be too much bulk fermentation. I know a few years ago when I was struggling with oven spring I think one of the things I changed was only letting it rise to 1.5x the original volume and that seemed to help. As far as giving it more and more folds, I only ever give my dough three folds during bulk fermentation, usually spaced 30 minutes apart. If you keep working the dough throughout the bulk, you may not be giving it time to produce as much gas as it could. Just a thought.

It might also be an oven temperature thing, either too hot (forming crust too fast) or too cold (not producing enough steam or expanding the CO2) might reduce oven spring.

Either way both of those look really good! Love the color on that focaccia.

This user, Steve Petermann, did a lot of work testing grains and other add-ins to see how much water they could absorb, both room temp water and boiling.  Worthy of a boommark:

Granted, adding in cooked grains as a porridge is going to be different. How, I don't know.