A new starter, a new build method, and a little decorative scoring

A new starter, a new build method, and a little decorative scoring 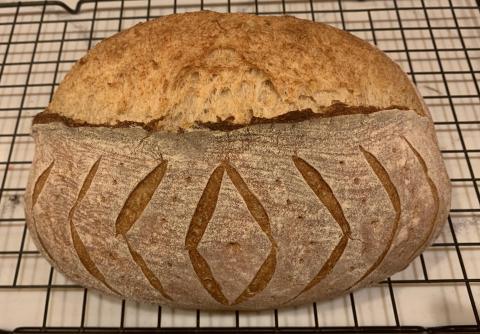 Let's get the obvious out of the way...  My first attempt at decorative scoring is, well, let's say rudimentary at best.  Still a lot to learn on that!  :-)

Just before Labor Day weekend, I had a bunch of windshield time and was thinking about random stuff.  Thought I remembered reading somewhere that the Gold Rush cooks would keep a ball of their starter in a bag of flour and break it out when they needed to bake.  Then, refresh it and put it back in the flour bag.  I tend to like the traditional and historic side of things, especially this hobby, so I decided to give it a whirl.

I have a blend of wheat varieties from Janie's Mill that I've been grinding as my whole wheat: Glenn, Red Fife, Turkey Red, and Warthog.  Before we left for a 3-day camping weekend, I mixed up 40g of flour (50% WW blend and 50% Bread flour) at 45% hydration and formed a dough ball.  That went into a jar, was covered with bread flour, and put in my proofing box at 76 deg F.  3 days later I came home and found a nice mound in the top of the flour and the dough ball had definitely grown.  It also had a hard shell with an active starter center.  I did multiple refreshes.  A few at 24 hours.  Then a few at 12 hours.  Since then, I have been refreshing it at 1: 0.9: 2 with about an 8 hour ferment.  After 8 hours, it goes into the fridge.  This is my first bake with it.

I've also been done a few bakes recently with a 2-stage build on the levain.  The first is at 100% hydration to promote yeast and the second down at 60% to promote acetic LABs.  This is based on comments from one of the recipes on The Rye Baker website.

The resulting loaf had great spring and was maybe the thinnest, crispiest crust I've ever achieved.  This isn't full of cracks like others have attained, but it's the first one I've ever had.  My baking setup, times, and temps were standard for me so no changes there.

The loaf hasn't been sliced yet and I had to travel for a day.  It smelled great though!  Will try to post a crumb shot when I get back home and slice it.

Nice color on the crust and the crumb looks excellent.  Did you dock the dough?  If yes, what was the reasoning?  Usually you only need to dock a dough if it’s a high hydration rye.

Thank you Ian!  I didn’t dock it per se, but I did put shallow holes in the dough with the tip of a bamboo shishkabob skewer as part of the decorative scoring.

Thanks Mini!  I was surprised by the crumb.  It was one of those “make it in the background while you’re doing other things” bakes.  Need to see if I can reproduce it.  😂

at the same time and it should work out.  "In yeast we trust."  Lol!

Beautiful bake Troy.  The oven spring, bloom and crumb are all wonderful, you must be so pleased.

Pleasantly surprised Benny.  And definitely more sour than my white 100% hydration starter.  Not overpowering, but noticeably different.  Need to use it some more to understand it better.