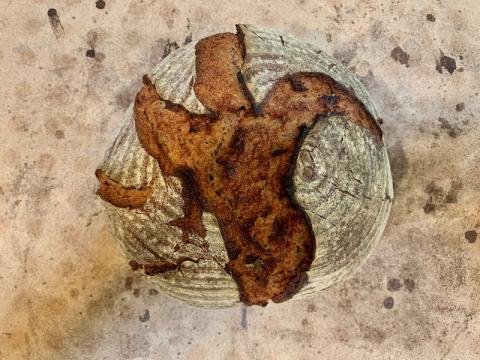 Hansjoakim was a regular contributor to thefreshloaf for a long time, He was a physics graduate student at the time, as I recall, and an amazingly adventurous and talented chef and baker. In September, 2009 he posted what he called his "favorite 70% rye." I asked him for the formula and baked it myself a week later. It was easy to see why it was a favorite. It was an easy dough to handle for a 70% rye, and it was delicious to eat.

Over the intervening years, I have made this bread a few times. Every time I make it, I wonder why I have let so much time pass since the last bake. This week, I baked it again, and it is as wonderful as ever. I baked it yesterday. Let it rest wrapped in baker's linen overnight and had some with butter and smoked salmon for breakfast. Seriously yummy stuff!

55% of flour is pre-fermented.

Mix the rye sour final build the day before you plan to bake. Mix all the ingredients in a medium bowl and cover tightly. Ferment for 14-16 hours at room temperature. For example, if you plan on making the bread in the morning, you can mix the rye sour the night before.

Nice to see you David. That’s a lovely bread and I haven’t made it in a long time! I always love the chaotic cracks as well. Hope you are doing well. c

Thanks for your comment. I haven't made this in a long time either. A mistake. ;-)

I'm well. Vaccinated and boosted to the max and planning on seeing family for the first time in 3 years!

I hope you and yours are as well, as well.

David, that is fine looking loaf, and the oven spring is impressive.  Before posting this comment I looked back at my blog following my bake of this bread in July 2018 (yikes, four years ago -- was it that long ago?).  My loaf turned out fairly flat with a height of perhaps three inches.  You have inspired me to try this bread again.

Great to see any post from you, and I am glad to hear that you and your family are doing well.  (By the way, your posting on BBGA about baker's math was superb.)

I have found that proofing high-hydration loaves and high-rye loaves in brotformen smaller than you would expect for the loaf's weight results in a higher loaf after baking. So, this 1100g loaf was proofed in a brotform ordinarily used for 500-700g boules. Hope that makes sense.

Beautiful loaf and one I'll have to try.  I love your Jewish Sour Rye recipe and will definitely take your suggestion that this is one to put on the baking list!

This is such an incredible loaf for 70% rye David.  Great tip you shared about using a smaller banneton than usual to get more height out of the bake.  I’ll have to try this the next time I feel like having a rye loaf.

If you try using a smaller brotform than normal, please let me know what you think of the result. I started doing this after baking a 90% rye that spread out more than I liked. I've practiced this technique about 10 times so far with uniformly good results.

I had to try this as well. Thanks to your excellent description It was easy to follow the recipe. I made two changes: (1) I added 1 g of salt to the rye sour. I tried to follow the deliberations of the well known German blogger and author Lutz, see here: https://www.baeckerlatein.de/monheimer-salzsauer-verfahren/. This is probably worth another discussion. Regardless, the claim is that adding a portion of the salt to the rye preferment is beneficial to the taste and outcome. (2) I used my cloche to bake the bread. It turned out nicely. It remained relatively flat, however, similar to what Ted had commented on. I have only one banneton, one size fits all. It may not be as small a s the one that you described. I like the taste a lot. Thanks, Tom.