Bialys with Sourdough Levain and Poolish

Bialys with Sourdough Levain and Poolish 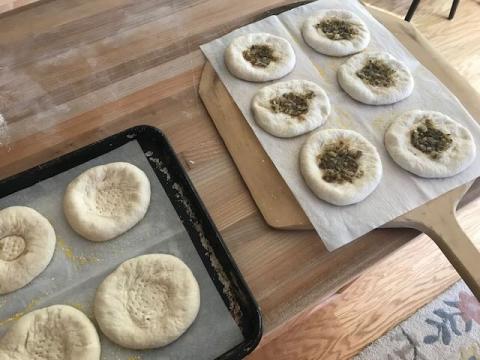 Finally got around to making bialys based on the King Arthur recipe. I've always loved the bialys they used to make at the Mendocino Bakery which has since changed hands several times and had sadly disappeared from the menu on our last visit early in the Covid epoch. I will be looking for them when we visit again in a few months. In the meantime, these came out just great so we won't go without.

Had some sourdough levain on the counter and added a poolish just because. At 60% hydration, the dough seemed quite stiff but my newish Ankarsrum mixer handled it well though I had to do a bit of dough herding with a silicon spatula as it (the dough) really wanted to climb up the hook and into the arm that positions the hook or roller in the bowl. The results were quite good, so will be in the repeat often lineup.

I deviated from the King Arthur recipe in a few ways, including the levain and poolish and using a 50/50 mix of bread flour and AP instead of the 100% bread flour specified. Levain and poolish were both built using AP flour. The results were good enough that I will probably do the same in future iterations.

This was an easy prep. Less than an hour to build the dough, though the final kneading in the Ankarsrum required some attention as previously mentioned. The final shaping will take some practice as most of my bialys failed to stay depressed in the center even though I docked and severely compressed the center dough with fingers then a small bowl. Will try picking them up and stretching the centers thinner next time. Never mind that they were most excellent spread with a little (ok...a lot of) cream cheese. Next batch will need lox, red onion and ripe tomatoes from the garden. 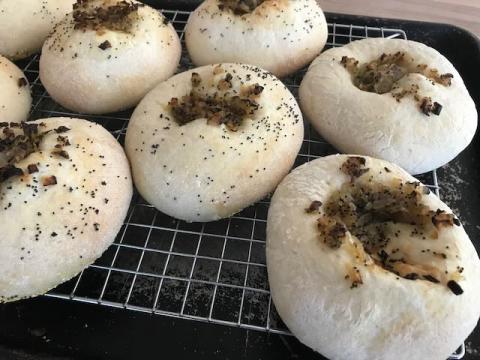 Light browning doesn't show too well here (lighting?), but the finished goods were lightly browned with a good chewy crumb.

These have been on my list to bake for quite some time, yours look delicious.