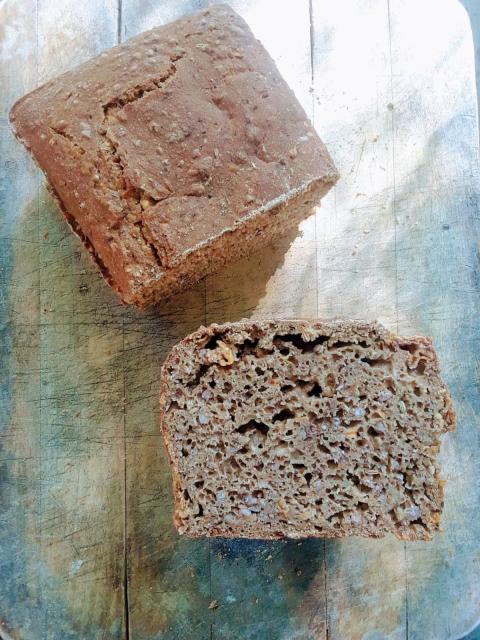 While bread dreaming about the pages of TFL, I came across a forum about a rye loaf with carrots.  I loved the idea and still had a few pounds of mini winter carrots needing to be used up, so I went for it.  I don't make rye heavy loaves often enough (though I should because I love them) to have a set recipe.  Rather than do the wise thing and research, I did the lazy, middle of the week thing and just made it up as I went along.

a nice pile of shredded carrots

a good bit of buckwheat soaked in whey (toasted first)

Tried to gently fold it occasionally while making dinner, but it was too wet to come together and be handled really.  Put in loaf pan with parchment paper

put in fridge for ~24 hrs. so I could bake it alongside the baguettes and not waste the oven heat.

All in all I'm really happy with how it came out, especially for such a winging it approach.  It tastes wonderful- both rich and tangy from the rye and a bit sweet from the carrots (and maybe the einkorn?). It rose to the brim of the pan, then domed nicely.

There was one mishap though- while the parchment paper allowed the loaf to come out of the pan easily, all that time sitting with the wet dough in the refrigerator melded the paper to the outside of the dough, and I had to spend 15 minutes peeling it all off bit by bit once the loaf cooled.  It was an imperfect process that resulted in some of the crust being peeled away as well.

Looking good! I was just thinking about making a carrot rye myself, was trying to find an existing recipe. For some reason that discussion from here stuck with me, I was very curious to try it. Haven't decided how to do it yet though.

Well I guess this "recipe" won't be helping much there, but I heartily recommend the carrot rye combination.  I probably used something like 1-2 cups of shredded carrot, and I think even more would have worked and likely only improved the taste.