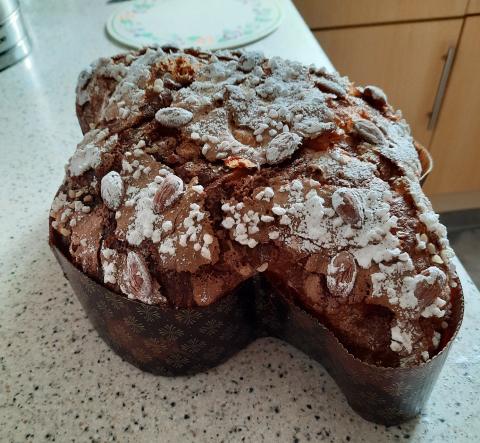 It has been a considerable blot of time since my regularly featured Italian enriched doughs were frequently demonstrated. I am out of practice, and in need to validate my reputation, even if to myself but not only that but to exceed where I recognised the faults. Now armed with a new bit of kit, the Hanna “Bread and Dough” pH meter, I wanted to go deeper where such tracking was once a novel endeavour, the time had come to up my game as it were.

Most of the Grande lievitata I have produced to date have always suffered from a lack of exceptional fermentation control. The end product didn’t quite reach the excellence I craved. Flavour and softness – a sign of mastery, was just a little lacking. Still, in technical terms I have enough knowledge to know how and where in my processing can I tweak things to bring about those much desired improvements.

A story from several years ago… The best Panettone I ever tasted was crafted by the masterful hand of one “Rocco” of Wimbledon, London. I was given his contact by chef Theo Randall (Intercontinental, Park Lane, London) where I proudly presented him (Rocco) with the Pandoro I made. His commanding presence was not shy just like most Italians as he swiftly instructed his colleague to slice open the Pandoro. From one half of it he put his nose to the cross section and inhaled deeply, examining the aromas carefully. “You used cocoa butter?” he asked, to which I confirmed. He took a slice and ate a piece. He was not blown away, not much reaction really came forth, quite frankly. My memory fades in the intermediary of events but I’ll never forget his considerate but very truthful remarks. He said as far as “The Pandoro” goes I’d give yours a 3 out of ten but for a home baker to make this I’d give it an 8 out of ten. He offered me some of his Panettone to try and it was a revelation to say the least! The flavour was abundant and so expressive, and the softness was like dream of decadent delights. Amazing! After our talk and a potential job offer to work for him, I left his shop with my tail between my legs and a loaf of Durum bread under my arm. Although as I am my own strongest critic, Rocco made it clear what deep down I already knew. I knew then I could do better.

Now where was I…

So, between work I have been maintaining and feeding my Lievito Madre starter with great frequency and measuring the pH persistently. The data I have recorded, see: Impromptu LM pH data (Temp) | The Fresh Loaf

From feed cycle 15a I attempted my third run at an enriched dough. The primo impasto of the first didn’t rise at all in allotted 12 hours, the second rose well but was way too acidic and the third, again it rose well and was still too acidic but not quite as bad as last time. I decided to see it through anyhow.

The formula I had been working on was The Colomba di Pasqua formulated by “Panettone god” Iginio Massari.

Some deviations from the intended but still very faithful to the original recipe. I used stronger flour than specified but cut it with some weaker flour also.

However, because things were not where they needed to be in terms of the chemical properties, namely the pH the dough handled not quite as it should. The dough was a little slack and a wanting of that vibrantly elasticity consequently led to the slightly dodgy shaping.

And finally, the inversion as required was a fraught with difficulty. Within seconds of removing this from the oven I could see it sinking like a deflating balloon as I tried to figure out how to skewer it in the most optimal support giving way. It had pretty much flattened in those few seconds as I tried to single handily flip this thing upside down, it was so very tricky… Like trying to upturn a bag filled with water.

In the end, it looks the part, but it was a “wrong 'un” from the start.

Don’t expect a glorious crumb shot. Just an erroneous one…

You sure like challenges! Way beyond the scope of most bakers.

I am excited to hear that you are going to work with pH. Looking forward to seeing some of your data.

Michael I just finally took delivery of the same Hanna bread and dough pH meter and used it for the first time.  So far it seems as advertised.  I will follow your panettone post with great interest.

WOW!! Looks absolutely mouthwatering to me!

Michael, this is a very beautiful colomba. It's a beautiful bread, really. Massari's recipes never fail to impress, for sure.

I am still hoping to see its crumb, please, and your taste/aroma testing evaluation.

I guess this turned out better than expected, it's very delicious especially with my morning cup of coffee. The aroma is clean and fragrant with no overt off-notes, so I guess the fermentation was on the right track, just a little heavy handed. During production the leavened first dough had too much of a hot / toasty butter aroma, so before measuring the pH I knew this was too acidic. Despite that, the finished bake while it expresses an apparent elevated acidity, at the same time it is also fairly subtle and pleasant. The flavour is mostly buttery, the texture fluffy and shreds as expected. It is in-line with the the Grande lievitati I have baked to date. Still looking to perfect this...

The higher acidity means this dries-out and stales quicker than a textbook example from one the maestros.

There are some major crumb issues, but here are the best shots.

Thank you, Michael! The rest of us are having our morning coffee without a slice of colomba, imagine that and have mercy on us ; ) Well, I am having mine while looking at your colomba.

It's absolutely stunning. Whoa... You would probably eat it all freshly baked or freeze a portion, so staling is a non-issue. Also, it's a low hydration dough, really, it probably won't dry out as in becoming sawdusty dry for as long as you keep it covered. Your experience with it will tell.

How are you going to perfect that??? Really, I am serious, what are the things you are planning to pay attention to the next time you'll bake it?

Man, what an insanely beautiful loaf of bread! Oh God...

Thank you again Mariana, your kind words are very rewarding and very much appreciated.

Ultimately, I still need to get the acidity right, the pH was way too low. Hopefully, I can find the time try this or a similar bake again.