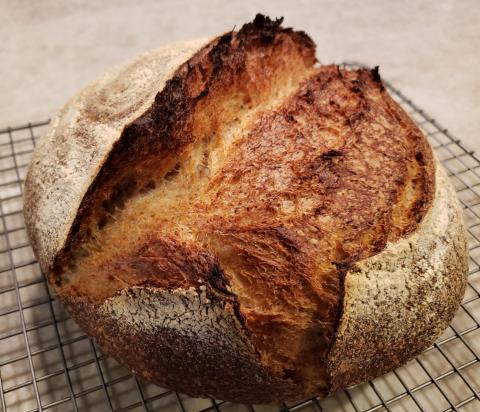 The other day, while looking for rye flour at my local Whole Foods, I came across spelt flour, made by the same company, Farmer Ground http://www.farmergroundflour.com/. I used their organic rye flour before, and while I am still very new to baking a good, mostly rye loaf, I liked the taste the rye flour gave to my wheat loaves when it was added in moderation.

I have heard about spelt and spelt flour before, and decided to give it a try.  Initially, I thought about adding just a small amount of spelt to replace all-purpose flour in my trusted go-to recipe for sourdough.  I simply wanted to see how it would taste. When it came time to bake, however, I suddenly became very "inspired", and figured "Why not just see what else I can do?"  With all of my bread-baking attempts, the loaves always come out edible, even if terribly looking, so I was not particularly afraid of a failure. As the result, I present to you a loaf baked with not just two, but four flours: all-purpose wheat, whole wheat, dark rye, and spelt.  The dough was a pleasure to work with, nice and pliable, not too dry and not too wet, albeit a bit sticky, even given the relatively low moisture amount. I suspect the "stickiness" was the result of rye flour being present, as I have experienced that before (to the point where once I had to literally scrape my loaf out of banneton where it was placed for final proofing).

I must admit I didn't start with any specific proportion in mind, and at first was planning to use much more of "other" flours, but then I became concerned that they will alter the overall behavior of the dough too much, so I reduced their amounts to some arbitrary low numbers.

I built my levain in the morning, as usual, using my refrigerated starter, filtered water, and all-purpose flour. The proportion is 50 g / 50 g / 50 g, which makes 150 g of levain that I use later. I warm up the water a little, to quickly bring the mix to the room temperature, and then let it rise for approx. 6 hours, depending on the temperature in the kitchen.  Once the mixture is bubbly, smells of bread yeast, and has roughly doubled in volume, I consider it ready to go.

For the dough, I start with warm water, so the yeasts start working fast. I mixed all of the ingredients, except for salt, in a stand mixer on low speed until everything seemed to be well integrated (about 2 min), and then let it fermentolyse for 45 min in an oven that was first warmed-up on Bread Proof setting.  For my regular loaves, I have also done it in a cold oven, and simply increased the fermentolyse time to 60 min.  Then I added salt, and mixed the dough in a stand mixer with a dough hook for about 7-8 min on speed 2.  Then the dough was moved to a glass bowl and covered with plastic (here, I use a shower cap).

I let the dough sit for 30 min, then did 4 rounds of stretch-n-fold, with 30 min rest intervals in-between.  Finally, I let the dough rise undisturbed for approx. 2 hrs. The loaf was formed as usual, placed into a banneton with linen cloth insert (because I was afraid the dough with rye would stick again), and refrigerated overnight, about 12 hours.

In the morning I preheated the oven to 500F, along with my cast aluminum cover inside, placed the loaf on a cookie sheet lined with a silicone mat, and baked as follows: covered for 20 min @ 475F, then uncover, bake 15 min @ 460F, then 15 min @ 450F.  When done, internal temperature of the loaf was 207F, and I felt it was a bit too low, so turned off the oven and left my bread inside for 5 more min. This resulted in internal temperature going up by only 0.5F, and was perhaps a bit detrimental to the crust (although I am not completely certain about that part).

The resulting loaf, just out of the oven: 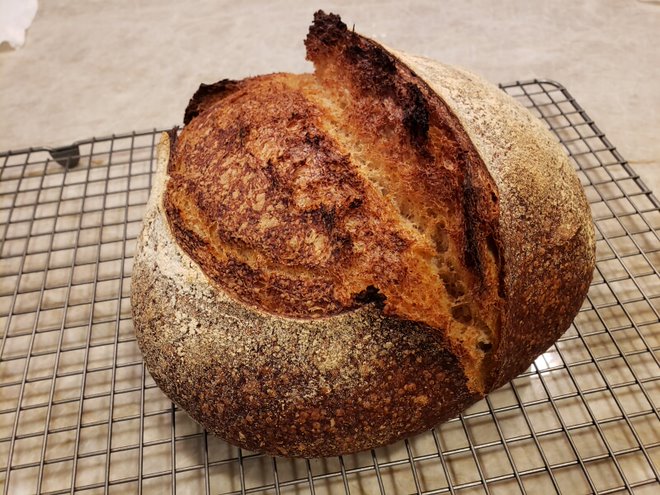 The crust was crunchy and tasty, with a distinct rye flavor, but I thought it came out just a tad bit too "tough", and slightly bitter in places, although it was definitely not burned.  Perhaps those last 5 minutes inside the cooling oven were not needed? 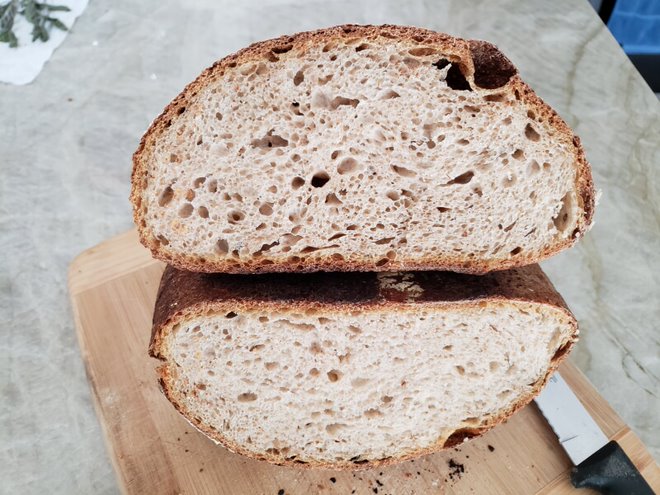 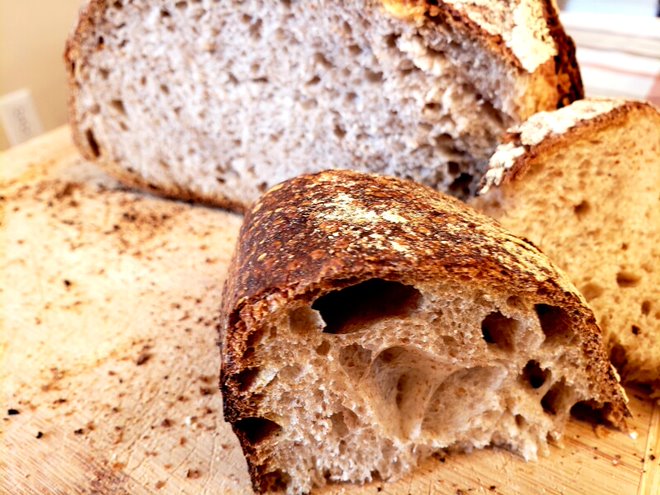 Overall, I rate this bake as a relative success, and will definitely try making it again.  As always, I appreciate all of your thoughts, comments, and questions.

Very nice bake Cooper, I like the colour of the crust and the nice crumb you achieved.

especially if it is whole grain.

My experience is that whole spelt is a "sugary" and fast-fermenting flour.

Like any grain, it's useful to know if spelt flour is whole-grain or "white" (refined) as whole grain flour boosts fermentation rate and the bran starts to interfere with gluten development if used in anything other than small proportions.

The package only states "Organic spelt".  Perhaps, I will try calling the company and asking them.  It surely doesn't look like whole wheat, color and texture-wise, but then I don't know what spelt flour looks like anyway. :)

Tomorrow I will bake a variation of the same, but with a bit more WW flour and without rye, just to see how much rye contributed to the texture and the flavor.

since "whole grain" is a selling point, my assumption is that anything not labeled as whole-grain is not whole grain.

I think stuff that is not normally/traditionally refined is an exception, such as beans ground into bean flour.

but that flour is definitely not white, and has some orange/light brown "specks" in it.  They seem like a small company, so it's possible all of their non-typical flours are whole grain?  I'll definitely call them and ask.

Their only spelt is under the heading of Whole Grain. And is not included under the Sifted heading.

Still, you'd think they'd want consumers to have that information just by reading the package on the store shelf, and not have to take the extra step of going to the web.

Rye to your other two types is the perfect amount for flavour combo. Well done! And welcome to the world of mixing flours.

Yikes! I didn’t explain myself very well. If you decide you want 30% whole grain and you want rye in there, split it like this: 70% regular white flour (AP or bread), 20% spelt and 10% rye. The rye is half of whatever wholegrain flour you use whether it’s a mix or not of various grains like durum or khorasan or spelt. One of the users here recommended that mix and it does provide great flavour. Rye is tricky and sticky so unless you are really good with it, it’s best to keep amounts of it low.

Yes, rye is still very tricky for me, but I like good rye bread, so I'll keep trying.  So far I made bread with 20% rye, 80% wheat, and it was good, with a distinct rye flavor. I also tried 70% rye a couple of times; the last one was a real disaster, as I had to scrape the dough out of the banneton. :)  Lesson learned: I will use linen inserts until I get more comfortable, and perhaps decrease hydration too. I do not like to heavy cover my loaves with flour prior to final proofing, but I may have to use more of flour on rye loaves, or start using a loaf form (the ones I baked were regular round boules).

with only spelt, more of whole wheat, and AP flour (no rye).  I also experimented by cold-proofing is seam down, and then placing on the baking sheet seam up and letting it rip as it wanted to.  I saw that mentioned in one of the very old posts, and I figured it could be a cool experiment.  The bread came out very tasty, but personally I prefer a more controlled expansion and a nice, crunchy ear, so I will continue proofing and scoring as before. 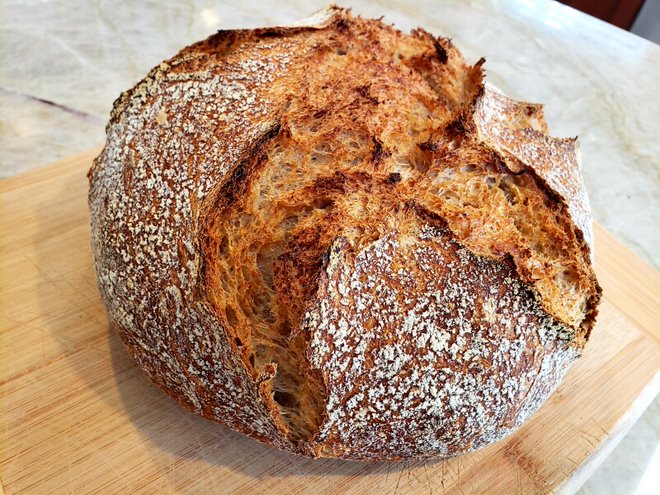 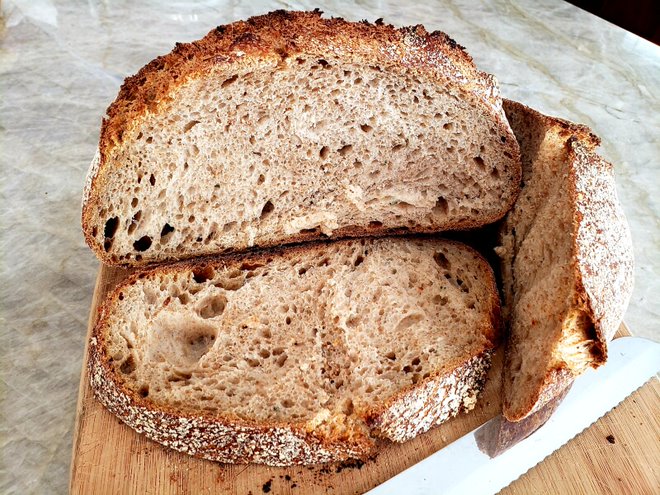