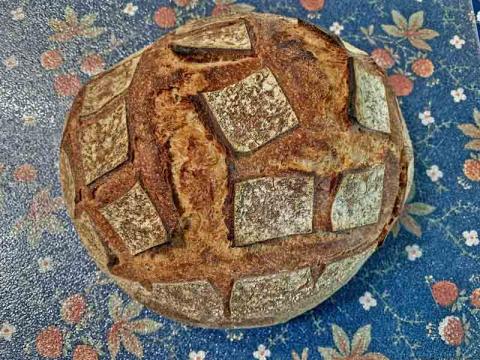 My recent trials of sourdough bread production methods have made some very good breads, but still not exactly what I want. I recall that, about 10 years ago, I baked some breads from a recipe developed by a home baker who was an active participant on The Fresh Loaf at the time, “Susan from San Diego.” At the time, I felt it was the bread I had baked closest to my ideal. So, I thought I would return to that bread, applying some procedures I had adopted with good results since that time.

Of note is that Susan's recipe called for two builds of firm starter before mixing the final dough. As I recall, it produced a rather sour, crusty loaf with a moderately open crumb. Back then, I mixed the dough with a stand mixer. For this bake, I mixed by hand.

I made two loaves. One, I cold retarded for 17 hours then left at room temperature while the oven pre-heated. The second loaf was cold retarded for 40 hours. I was eager to see whether the second would be much more sour, as one would expect.

Note: If not ready to make the Final Dough when this starter build is ripe, the starter can be refrigerated for up to 3 days, until you are ready to proceed.

The crust was crunchy in the darker-baked parts and chewy in the rest. The crumb was moderately open and mildly chewy. The flavor was complex, sweet and creamy. There was the slightest hint of acetic acid tang. Interestingly, even though the whole wheat was only 12% of the total flour, the distinctive flavor of Turkey Red wheat came through.

I baked the second loaf 40 hours after retarding it, including the last hour at room temperature, while the oven preheated. It turned out ... well ... it was kind of spectacular, in my humble opinion.

The crust is crunchier. The crumb has the same chewing consistency - what I call tender/chewy - but it is substantially more open, and the flavor is substantially more sour. Interestingly enough, I think creamy, lactic acid flavors still predominate, but there is more of an acetic acid tang. Now, that is all based on a first taste when the loaf was just completely cooled. If the flavor profile evolves, I'll add a note.

As far as I can recall, I have only retarded dough for more than 24 hours once before. That was an experiment with my San Joaquin Sourdough, and the retardation was of the dough before dividing. Today's loaf is so good, that I believe I'm going to stick with this routine for a while. It sure made delicious bread.

David, you never cease to amaze me. I love reading your blog and recent entries.

I  normally stick to simple tried and true recipes without straying too much from the original.

I'd love to taste this bread.

So how do you like this one compared to the your SFSD version 4?  Version 4 was our favorite that Lucy used to make her way with a bran levain and a bit more multi grains and water. .  Can't wait to see the 40 hour version of this one too.  Very oce bread all the way around.

Look at the 2nd loaf!

It has been a long time since I baked that SFSD series. I can't really recall how they tasted.

sort of white SFSD bread we have sen in long time!  Spectacular is right.  I can see a 40 hour retard at lower hydration and a bit of mixed whole grain in Lucy's future:-)   Well done indeed!

Wow! That takes some planning! How cold is your fridge?

Your loaves are outstanding! I need to try this when I have some time in between my regular weekend baking!

The way I see it, the longer retardation is liberating. Since the bread can be baked after any time between 12 and 40 hours in the fridge, your convenience can dictate when you bake it. It's good in any case.

My fridge runs around 42ºF.

The crust. The crumb. Just beautiful :-)

I appreciate your kind words.

I have 4 loaves of this recipe in the fridge now but I have one question. After taking dough out of CF how would I know if it needs more proofing at RT?

I kept back a little dough and let it sit at RT for about 4 hours, wanted to see how it would come out. It was tasty and delicious. One question the large crumb in this photo is that from working the dough to much? Will the dough that is sitting in the fridge develop smaller crumb?

This dough is nice to work with

I use the "poke test" to judge the stage of proofing. The loaf is ready to bake when the depression made by a finger poke springs back very slowly.

My experience with loaves cold retarded for 40 hours is that they have more sour flavor and the crumb is more open.

One of your photos didn't display. The crumb photo that does display shows some very large holes. That can be from a shaping problem or, more likely, from over-proofing.

I would have to guess it is from shaping as I followed your instructions. We shall see after I bake off the other loaves.

I think I will bake 2 tonight after 24 hours and then the other 2 tomorrow night after 48 hours.

Also I am going to try and get a darker crust like yours..........your info helps me a lot

Dave, Thanks for sharing your knowledge and your recipe! I gift my breads away but I kept one to cut tonight and see how the crumb came out. I noticed you didn't pre shape is there a reason you don't have to? Also I might have RT it a bit to long, with a long CF is it ok to under ferment? The large holes is that from over fermenting?

I did pre-shape. I just neglected to document it, I guess.

I associate those huge holes with over-proofing.

The photo taken with the larger holes was on the end of one of the breads, I think this photo is a better representation of how the breads came out.

I will make this recipe again this weekend, if you are looking for a bread that gives the most flexibility to bake THIS is the one.

First off, this looks amazing, and I am preparing to bake a loaf or two right now.  My question is, I use a NMNF starter (not liquid). In your opinion, should I build it up to a liquid starter first, and then carry on, or could I just do the levain build with the NMNF?  I'm thinking it should be fine with the later, since I'm doing a levain build anyway - but value your opinion.

use your firm starter. It will be fine.