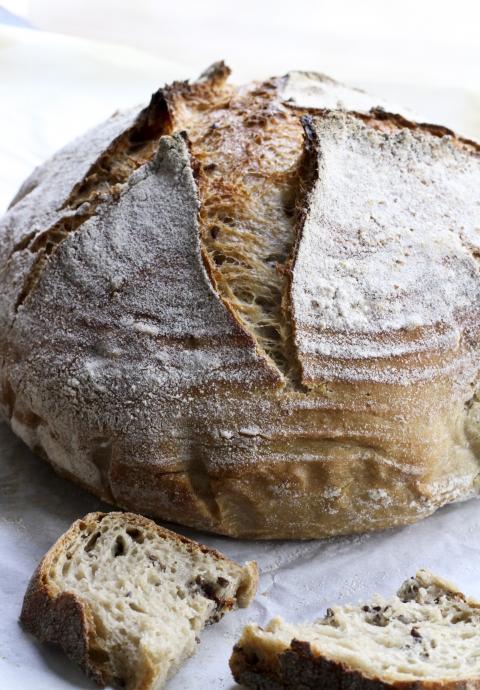 I’ve been experimenting with sprouted whole wheat flour (KA flour, not the home milled varieties) wondering what’s the upper limit I can deploy, without compromising the decent open crumb texture. Started with 30% and then increased it to 50%, a few days ago. Mistakenly I put in 100 grams more water than intended. I had no choice but to add a little more sprouted flour. Unfortunately, at the stage after autolyze, the dough won’t be agreeable with that much more flour. Gritted my teeth and, reluctantly, I had to deal with a much wetter dough than I’m comfortable with.

Well, those are the situations, until you are tested, you don’t know how far you can go beyond the usual boundary, real or imagined. Can’t believe even bread making is a mental thing. Didn’t think I can handle a wetter dough than 80% for hearth breads. A siren would go off at that marker, screaming danger! I just don’t go there.

To my surprise, the finished loaf was much more open than the 30% sprouted bread I made and posted recently. See the side by side crumb comparison in the last image. (30% on the left and 50% on the right.) More pictures of the 30% are shown here: http://www.thefreshloaf.com/node/51613/special-saturday-wannabe-falling-short.

The major factor was none other than the hydration level. No doubt, there were differences between the two bakes: flaxseeds addition to the 50%, preferment amount, autolyze duration, cold retard. They were not meant to be controlled experiments. To me, the key contributing factor to the better outcome of the 50% sprouted bread has to be the higher hydration, 84% vs. 65%.

This was a breakthrough for me, but just with the bread: I no longer fear a high-hydration dough. It’ll take me to some underexplored and rewarding territories, I am convinced.

I made pear and goat cheese crostini with the bread. If you need an idea what to make for mom as part of a breakfast or lunch spread on Mother’s Day, consider making this crostini. The sweet smoky flavor of the grilled pear and the creaminess of the goat cheese is a winning combination. There is no better way to show off the bread you’ve labored for a long time to perfect.

Glad your courage prevailed and you were rewarded with this gorgeous and delicious loaf. That crostini looks tempting! Of course, pear always goes well with blue/goat cheeses.

pear, cheese and a nice piece of sourdough bread is outrageously good. I made one just for me and I enjoyed it.

photos, and a tremendous loaf of bread to top it off!

That's great that you forced yourself to push the hydration limit, and had this great success to encourage you to continue experimenting.  it really is stories like this (especially this well told!) that encourage newbies like me to keep pushing a little bit, too.

Thanks so much for sharing, and keep baking happy!

level has to be one of those powerful levers to push the bread to the desired texture. There are certainly reward going beyond your comfort zone. I really believe that now!

and see if you like it better.  Sprouted grains doesn't need as much water as non sprouted ones.  I think you might like a low hydration even better and the crumb might even be better.  This one came out nice for sure and it has to be tasty.  Well done and happy baking!

Appreciate your sage advice, as always. I have been following your lead to increase the amount of sprouted flour. This is the best one I've gotten so far, other than the 100% straun bread, but that's a different bread all together. I tweaked the usual routine as well: longer autolyse, no cold ferment and lower % of levain, to keep the dough from rising too fast. I wonder whether there are other aspects I should do to improve the bread. I'm aware and you talked about how much better the bread would be if I sprout and mill my own flour. Right now, that's on the back burner. Time is the factor.

I would definitely try the 78-80% hydration as you've suggested. What's your take on further increasing the amount of sprouted flour? No sure I want a heavier and denser bread than this.