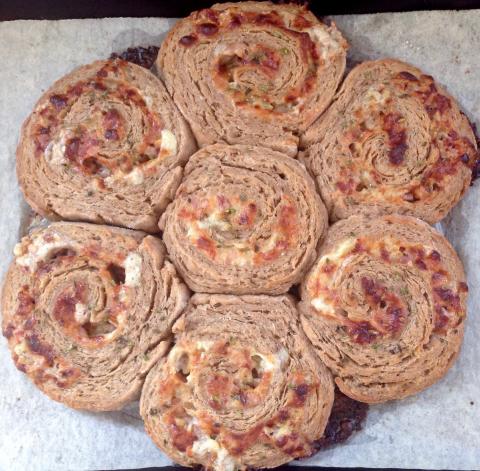 Just in time for World Bread Day 2016, I received my copy of Stanley Ginsberg's The Rye Baker in the mail.

I met Stanley several years ago at the The Fresh Loaf, when he looked for test bakers for his first book, "Inside the Jewish Bakery". Though, at that stage, some recipes still were a bit rough around the edges (my husband complained about feeling like a guinea pig!), the book was well worth it, and his Onion Rolls are still a great favorite with my customers.

Last year, I was happy to help with the translation of some German recipes Stanley considered for his newest book, devoted entirely to rye breads.

Leafing through the The Rye Baker, a cluster of spiral shaped savory rolls caught my eye. Not only because the "Swabian Rye Flower" looked so attractive - it was made with a laminated rye dough!

I had never even heard that such a thing existed.

Laminating the dough was not for the faint hearted. The recipe requires vegetable shortening for the fat layer. I had made croissants before, and if butter and dough are sufficiently chilled, the fat stays put during the rolling and folding process.

On this day neither my hands, nor the rolling pin or work bench needed any lubrication - Crisco took care of it! Fortunately, most of the shortening behaved, staying within the dough, and the fat leakage during baking was not more than to be expected.

We loved the hearty rolls! The laminated rye layers came apart and had a satisfying crunch, and the filling was delicious. The pretty flower shape, though, prevented the crisping in those places where the rolls touched. Being a sucker for crispiness, I would sacrifice form for function next time, and bake the spirals separate from each other.

But I will definitely make the Swabian Rye Rolls again!

To learn more, see the formula, the procedure (published with Stanley Ginsberg's permission!) and my take on it, please, follow me to my blog "Brot & Bread".

were made with lard before Crisco came about or butter flavored Crisco:-)  This recipe alone would make the book worth the cost!  Can't wit to make it as stand alone rolls too - with lard!

I can imagine it would be good with lard - in Germany it's not so shunned as here in the US, we use it (with fried apple pieces and onions) even as schmear on bread.
Happy baking,

1/3 duck fat, 1/3rd chicken schmaltz and 1/3 bacon fat.  Put some on carrots and spuds and then season with salt, pepper, onion and garlic powder with a bit of smoked paprika and then roast the veggies at 375 F for about and hour stirring at the half.  Best roasted veg ever!

It would be great in these rolls too!  Lets not talk about pastries.........I got a killer deal on hemp seeds ta Sprouts the other day.  They were giving away hemp hearts in little packages and I took them all - better than $12.99 a pound.  AZ is getting ready to legalize recreational pot and these fools try to ban ban hemp seeds.......can't fix stupid!  Lucy is going to do an update on Hempy Dopey Baguettes using sprouted flour for the whole grains in a bran levain this time...... and they will come in handy.

Say hi to your mom for me.  I just saw a great public television show on how great a trip to Hamburg is today and was very impressed with the city...... reminded me of Scandinavia with the water in the port  - no mention of bread though.

You should think of a second career and open a restaurant! I bet it would be a great success!

Meanwhile I'm in Hamburg, found one good bakery in nearby, and earn my badge for "Urban Boot" from fitbit, walking off all the pastry I'm eating (for strictly scientific continuing baking education purposes, of course!).

Plan a trip - first Maine, then Hamburg - it's worth it!

Thanks, Karin, for sharing them with us. I'm envious that you already received your copy of Stan's book, but I'm very much looking forward to meeting him and getting my own copy this weekend at his signing event at Grist & Toll, in Pasadena. Hope to see other Fresh Loafians, too!

have/had fun at the event, Cathy. I baked already two breads from the book. The Bavarian Rye tasted great, too.

First time to hear a bread like this. I agree, lard or schmaltz will make this better. What a great book! I just wish I can have it and try some recipes; it's still far from now.

I hope you'll have a chance to try some of the breads. When I'm back from my trip to Germany, I will continue my exploration of "The Rye Baker".