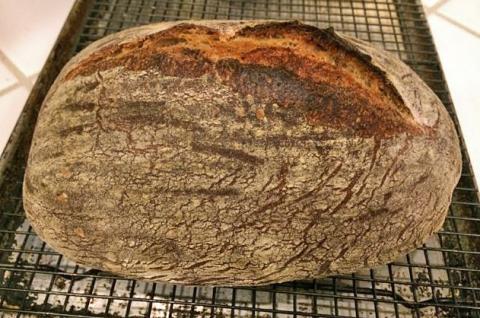 My brother, Glenn, bought me a surprise present: A copy of Kathleen Weber's bread cookbook. When I called to thank him, he revealed his motive. He thought I'd like it. We Snyder kids do that sort of thing for each other.

I have had the considerable pleasure of sampling Della Fattoria's breads both at the San Francisco Ferry Building Farmer's Market, where they come with breads and pastries on Saturdays, and also at their cafe in Petaluma, California. They make good stuff. But I believe I first heard of that bakery quite a few years before. It was the “Small Artisan Bakery” featured in Maggie Glezer's Artisan Baking, an award winning book published in 2000.

Weber's book was published in 2014, and it is interesting to compare her methods and how they changed in the interval since she was interviewed by Ms. Glezer. Notably, she began using an autoyse step. She reduced the speed and duration of her mechanical mixing. And she added stretch and folds during bulk fermentation. All three of these changes reflect trends in Artisan baking nationally. All would be expected to enhance the flavor of the product.

Since I am on the subject of Weber's methods in general, her other remarkable idiosyncrasy is that she includes her firm levain in her autolyse, withholding only the salt. And one trend she does not follow (unfortunately, in my opinion) is to not use baker's math in presenting for formulas.

Weber's Pain au levain dough is the base for several variations, recipes for which are given in the book. These include a “Potato Levain,” a “Walnut Levain,” a “Sausage-Sage Levain” and other equally tempting breads. For a first bake from this book, I selected the Pain au Levain without any of the additions.

Weber uses a firm levain. She gives clear instructions for making it from scratch. Her mature levain is a 50% hydration mix of 90% All Purpose flour and 10% Whole Wheat flour. She feeds her levain with 23% mature starter. My own customary firm starter isn't very different from this, and that is what I used to feed the levain.

+ Weber calls for pumpernickel flour. I have some, but I have some older rye meal that I thought would work well, and it needed using.

The cuts didn't open up as much as I expected, but I think that was due to over-proofing. There was some tunneling under the top crust which suggests the same.

The crust was crunchy at first but softened by the next day. Not surprising in an 82% hydration bread. The crumb was well aerated but with small, regular holes. The flakes of rye bran were quite visible. I'm sure the whole grain flours determined the crumb structure.

The flavor of the bread was very nice. It had the wheaty and nutty flavors of the whole wheat and the earthy flavors of the rye, both very prominent. There was discernible sourdough tang, but it was very mild. The one negative is that it tasted too salty to me. Looking at the baker's math, you can see that, in fact, there is a much higher percentage of salt in this bread (2.2%) than in most.

This is a good sandwich bread. It is good with cheese and with almond butter. When I first tasted it, I had the thought that I could make a meal of it alone.

I like this bread. If you have a recently fed starter, and you get an early start, it could be done for dinner in one day. I expect to be including it in my regular rotation. But I to want to try a number of the other breads in Weber's book also. I will report on them, when I do.

P.S. I made a couple loaves of San Joaquin Sourdough too.

Your loaves are always an inspiration, and thanks for the review of the book.  I flipped through it a few months ago and was also struck by the lack of bakers percentages in the formulas.  That said, she really holds nothing back and the opportunity to duplicate some of their breads (my favorite is still the rosemary meyer lemon) is welcome.  Of course, without the wood-fired oven like she uses, most of my attempts fall short.

She still does most of the baking on her property in Petaluma, a few miles from the shop downtown.  She also rents a few cabins on the property to weekend visitors, just a few steps from the bread production and baking facility (really just one large room).  Some friends stayed there and I got to see it, and the bakers (I think there were four total) are friendly and open about what they are doing.  It was eye-opening to watch how fast they divided and shaped the loaves - no preshape, no bench rest, at least for the panned loaves.  It's worth a visit if you want to spend time in that area.

They do some baking at the cafe in Petaluma, but I don't know how the work is divided between the WFO and the deck ovens in town.

A visit to the home site would be lots of fun. I'm going to look into that!

The over proofing didn't do much damage.from the looks of it.  The best part had to be the taste!  Well done and

I won't know how much impact the over-proofing had until I make it again without over-proofing. The taste was the best part. BTW, this bread seems to me like one that could easily be made without machine mixing. I would maybe do a "double hydration" and add another S&F episode.

when we all get to learn from posts like yours! Very insightful, helpful and educational for those of us a little further back along the path in our bread baking journey.. Thank you for sharing!

They're beautiful. Love the thick crust and brown crumb. I'll take this opportunity to ask for the link of your best SJSD variation so I can bookmark it. Thanks in advance sir.

Was your dough super slack.. I followed directions to a  T and the dough was very slack.. It is baking now but I was just curious.

I am talking about kathleen weber dough. not san joaquin dough,

82% hydration. Yup. It was slack. Having made many, many loaves from Forkish's book the past year, I'm pretty accustomed to glop handling.