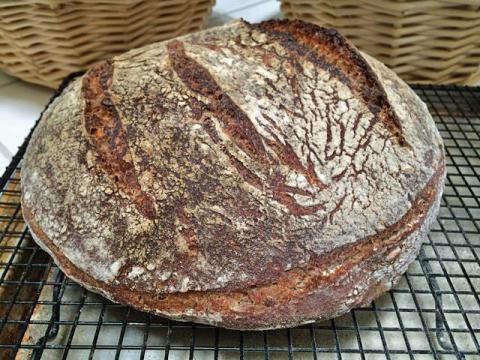 Today's bake is based on the “75% Whole Wheat Levain Bread” formula in Forkish's Flour Water Salt Yeast. I have made this bread a couple of times before, most recently in November, 2014. I modified the formula today by adding 180g of "Harvest Grains Blend" produced by King Arthur Flour, which I soaked in warm water for a few hours and then mixed it into the autolyse at the time I added the salt and levain. The blend has about 8 different seeds and grains. This started out a very nutritious bread. The added whole oats, flax seeds and other goodies in the multi-grain blend just "kicked it up a notch" in both flavor and health benefits.

This made a very wet dough that did develop some strength with the stretches and folds and, especially, with rather tight pre-shaping and shaping. Still, with the high percentage of whole wheat flour and the additional seeds and flaked grains, loaf volume was less than most of the FWSY levains.

I tasted the bread after it had cooled for a couple hours. The crust was crunchy-chewy. The crumb was very moist and somewhat chewy. The aroma of whole wheat predominated. The flavor was similar to previous bakes of this bread with a prominent whole wheat flavor and moderate sourdough tang. The seeds added a bit of a crunch. The only specific ingredient I could taste was the sunflower seeds, but the flavor of the basic bread dominated. We'll see how the flavors evolve. Forkish says this bread's flavor develops and improves over two to three days.

I had some of this bread with dinner. It was delicious both with a thin spread of sweet butter and with a thin slice of aged Gouda cheese. It is so moist, I expect it to be fresh-tasting without toasting for several days.

David and I just love the dark bakes as such. Though I am not sure if they would last 3 days or more :)

Well, each boule weighed over a kg. All but one half-loaf got frozen. It probably won't last 3 days. I had some untoasted for breakfast with butter. It was really good. The Flaxseed flavor was much more pronounced than it had been yesterday.

breads with lots of add ins - the crumb isn't ever going to look like a San Joaquin!  But your crumb is about as good as you could hope for.  Now that is a hearty healthy bread that has to taste great.  Well done and happy baking David

No complaints about loaf volume and crumb, just an observation.

I bet it is good with a nice slice of cheese! I've been thinking of purchasing the "Harvest Grains Blend" from King Arthur and trying it in my wheat loaf.

I like what the mix in Hamelman's "Multi-grain Levain" does better, but the Harvest Grains Blend involves less effort. I've thought about modifying the HGB to be more to my liking.

Strange but nice that we chose such similar breads to make this weekend.  Yours would no doubt make a delightful accompaniment for a hearty soup, among other possibilities.

It's supposed to be 108˚F here today. I'm sure this bread would be great with soup, but it's a cold beet borscht kind of day, if one wants soup.