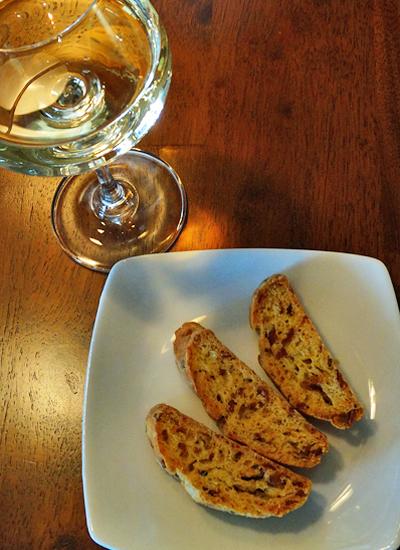 I'm a believer biscotti lends itself as well to savory versions as it does sweet versions. Unfortunately, there are few savory recipes to be found.  I've been making a romano and black-pepper biscotti for a couple of years.  It's my adaptation of a parmigiano and black-pepper recipe I found online. I've been thinking of other savory combinations since, but haven't acted on them: until today.

This is a bacon-chedder combination baked today. The recipe is mine.

1. Combine flour, baking powder, salt, black-pepper and butter segments in a large bowl. Using a pastry cutter, two table knives or your fingers work the butter into the dry ingredients until the mixture looks like course corn meal--a few pea-sized pieces of butter is fine.

3. Make a crater in the center of the mixture and pour in the buttermilk. Gently combine the wet and dry until a ball begins to form. Pat the mix into a smooth ball, and refrigerate for at least 45 minutes.

4.The dough will be tacky. Divide the dough into two masses and, on a lightly floured surface, form two logs approximately 2 inches wide and 12 to 13 inches long. Transfer the logs to a silicon-paper (or non-stick fiberglass pad) lined half-sheet pan. Gently flatten the logs to approximately 1 inch thick.

5. Pre-heat the oven to 350°F. Bake the logs for approximately 18 minutes. Test that the loaves are firm, but not crisp. (Light browning around the edges is a good indicator the loaves are ready for slicing) Remove the pan from the oven and reduce the oven temperature to 300°F.  Allow the loaves to cool in the pan for 10 mins.

6. Transfer a cooled loaf to a cutting board. With a sharp serrated blade, cutting on a diagonal, cut the loaf into approximately 15, 1/2 to 3/4 wide wafers. Arrange the cut wafers cut side down on the paper-lined pan. Do the same with the second loaf.

7. Bake the wafers 20 minutes @ 300°F. Test for firmness. The wafers should be firm, but needn't be crisp at this point. Being careful not to burn your fingers on the edge of the pan turn each wafer over exposing the previously down side. Return the pan to the oven and bake for another 18 minutes. Test. The wafers should be crisp to the touch without any spring. Remove the pan and transfer the wafer to a cooling rack. Cool until they are at least not a threat to burn your tongue.

I ran across a parmesan-black pepper biscotti recipe a few days a go and thought they sounded great. Nice coincidence to find someone who has made a similar (possibly the same) recipe and liked them. Your revision sounds wonderful, too.

Your photo is beautiful, love the crispness and deep brandy colors!

This one is on my to bake list. I may have to tackle this one in the morning. got the bacon cooled, got the cheddar. Sounds delicious!!! Best regards, Brian

If you give them a try let me know what you think, or anything you did differently.

...tried the recipe. After my first batch I felt it needed more "binding". Although my first try--relying only on a small amount of buttermilk and the butter on the liquid side--worked, I've tweaked the recipe twice. Second batch I reduced the buttermilk to two tablespoons  and added one egg. I was even happier with the results, but felt it could tolerate a bit more.

Today, I made this recipe.

The only change from batch #2 was one more large egg.

I followed the direction in the original post exactly.

That's it; no more tweaks.