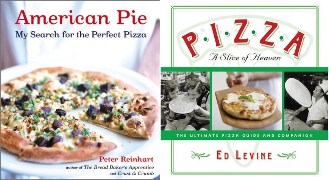 American Pie is half travelogue, half cookbook. Peter begins his quest for the perfect pizza with a trip to Italy, where he samples focaccia alla genovese in Genoa, unyeasted focaccia col formaggio di Recco in Recco, pizza Vesuvio with black truffle sauce in Florence, seven foot long pizza al metro in Rome, and the traditional pizza Margherita in Naples.

Back in the states, Peter visits multiple pizza joints in New York and New Haven for "Aa beetz" with "mutz" (pizza with mozzarella). On the West Coast, Peter visits with Alice Waters and tries the Cheese Board Collectives sourdough pizza as well as a raw food pizza in Larkspur. His trek continues as he eats deep dish pizza in Chicago, grilled pizza in Providence, and the increasingly famous artisan pizza at Pizzeria Bianco in Phoenix, Arizona (the owner of which won the James Beard award as the best regional chef in 2003).

The second half of the book contains the recipes. Peter provides twelve different dough recipes, which vary from the lean traditional D.O.C. Napoletana dough to the rich, take-out style Pizza Americana dough. The doughs are without exception simple and versatile, and between them are sufficient for any style of pizza a reader may be interested in baking.

Following the dough is a section on sauces. I love the two simple tomato sauces he provides, and the pesto is excellent as well. Some of the others, such as a butternut squash puree or a crab and cream cheese topping, are a bit too frou-frou for my taste, but look relatively simple to prepare.

Finally there is a section on putting all of it together to make a complete version of each of the pies he described in the travel section. Once again, the recipes that I've baked are excellent. A few of them are a bit more eccentric than what I want to bake on a regular basis (Blue Cheese, Onion Marmalade, and Walnuts Pizza, for example, which is good but does not satisfy my pizza jones), but with his dough recipes and instructions the home baker should be able to create most any type of pie that they'd like to.

This book has gotten a lot press recently, so I was excited when I found a copy on the new release shelf at my local library. Reading it left me thinking that this publisher has one heck of a PR person because there is very little in that justifies all of the attention it has been getting.

Pizza: A Slice of Heaven is not a baking book. There is only one recipe in it, one for your standard Neapolitan-American Pizza (which is also covered in American Pie). The majority of the book is taken up with reviews of pizza joints on the East Coast. Over 100 pages are dedicated to the pizza in New York alone.

Interspersed with the restaurant reviews are a number of short reprinted articles that all somehow involve pizza. Calvin Trillan, Roy Blount Jr., and Peter Reinhart all make appearances, but their articles do not add much weight to this book. A few of the essays are clever, but most are throwaways.

If I regular visited or lived near New York and wanted to eat at the best pizza places, I'd probably pick up a copy of this book. Otherwise, I say save your money.

Both of these books call out Pizza Bianco in Phoenix as deserving special recognition for creating the highest expression of pizza. His doughs are made from organic flour, filtered water, yeast, and salt and his toppings are almost all homemade or homegrown and are extremely simple. So if you find yourself in or near Phoenix, make a trip over there and find out what all the buzz is about.

Neither of these book give much credit to West Coast pizza: each one make some brief comment about California Pizza Kitchen and Wolfgang Puck and shrimp on pizza and then move on, as if West Coast pizza isn't real pizza.

I suppose this represents the prevailing attitude on the East Coast (both authors are from back east), but I find this disappointing. There are some very good pizza places on the West Coast, and many of us love pizza too. I know in Portland there is the Pizzicato chain, Hot Lips Pizza, Vincente's, and now A Pizza Scholls. Perhaps none of these places make pizza that will change your life, and, yes, you might find shrimp or barbecued chicken on top of your slice at one of these places, but it deserves more credit than either of these guys give it.

Clearly, of these two books I prefer Peter Reinhart's book, but I'm not convinced that his book is the last word on pizza. Have you read another pizza book that you'd recommend? If so, please post a comment.