Kamut and spelt sourdough with figs and rolled oats 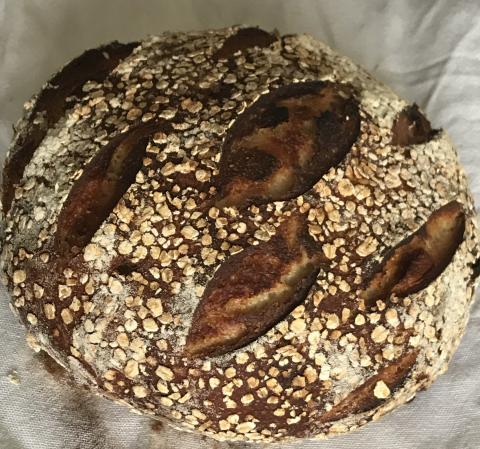 have been looking for the perfect loaf to go with the many cheeses I always have in my fridge and I believe I am on to something. :) I have prepared this though on a weekend and baked it straight from the fridge on a Monday morning - it definitely chased away my Monday morning blues.

I love how the buttery and nutty taste of the kamut and spelt compliment the sweetness of the figs and the rolled oats that cover the loaf make the crust extra crunchy.

1. Prepare your starter in advance.

3. Mix the flours with the water and leave to autolyse for 30 minutes. Add in the levain and salt and mix thoroughly until all the flour is incorporated and the gluten is moderately developed. Add the figs cut in moderately large pieces (you dont want the grinded, but not whole either).

4. Bulk fermentation: 3:30 hrs with SF after each 45 minutes. The dough will be quite difficult to stretch.

6. Shape them, ad some moisture to the surface and cover them in rolled oats. Place them in well floured bannetons and keep them refrigerated for up to 24 hours.

8. Open the oven door and leave the loaves to rest in the cooling oven for 5 minutes more.

9. Remove the loaves from oven. 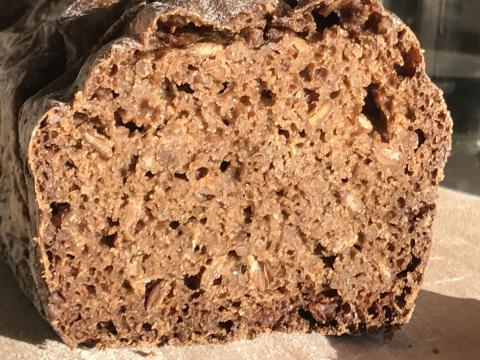 This bread takes two days to make and it needs to rest for 24 hours until it can be cut into. You have to prepare 3 different starters (a preferment and two soakers), have to then boil the rye berries, I even had to crack the rye berries using a manual coffee grinder as I couldn't find any cracked rye. Then the loaf needs to bake for 14 hours at a low temperature (yes, you read that right, 14 hours) and rest for another 24, whilst you are out there drooling next to it.

Having said that, it's worth every second, it's the most hearty bread I have ever tasted - during the slow bake the sugars in the rye will caramelize and give the loaf a very juicy full flavour. Moreover, the long fermentation and baking in addition to using whole and cracked berries makes for a very healthy bread too - tasty and healthy? Yes, please!

So, let's get to it - what do you need: a sourdough starter, rye berries, cracked rye (as I didn't have any, I just cracked some rye berries myself), water, salt and some maple syrup (or molasses). This recipe yields two medium size loaves.

- put the rye berries in boiling water and cover

- place the cracked rye in water (room tem) and cover

Leave to rest for about 16 hours.

- place the rye berries in boiling water on the stove and boil until soft (about one hour). Discard any remaining water and leave to cool down

- Prepare the dough by mixing the preferment, rye berries soaker, cracked rye soaker and remaining dough ingredients and leave to rest for 15 minutes.

- Place the dough in baking tins. Because the loaves will be baked slowly over 14 hours, it is paramount that steam does not escape, as such cover them thoroughly in both baking sheets and foil (I used 5 layers just to make sure, after all I didn't want 3 days of my life to be completely wasted). :)

- Bake for 14 hours at 120 C. The classical method states that the temperature should be gradually reduced, but I skipped that part and baked it at 120 for the entire time.

- After the 14 hrs have elapsed, shut down the oven and leave the tins inside the oven for 1 hour longer.

- Take the loaves out of the tins and leave to rest inside linen couches for at least 24 hours more. Resist the urge to cut through immediately after being removed from the oven at all costs.

The next day, you can finally enjoy the pumpernickel bread. 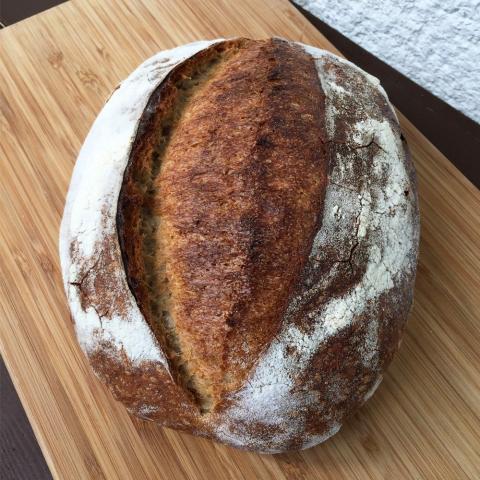 Ever since I started baking sourdough bread, I knew that San Francisco sourdough would be my favorite recipe, especially after reading the glowing reviews Dsnyder and Codruta (codrudepaine) have given it. Having tried it a few times now, I reckon it's presentable enough for the tough judges on the Internet, so there goes my first post on TFL. :)

Everyone who has tried it loves this bread. The complexity of the flavours is just amazing, especially given that it's basically just a white loaf: the crust is nutty, whilst the crumb tastes sourly sweet. It's definitely an all around favorite.

The crust starts cracking as the loaf leaves the oven and it's a delight to just sit there and listen to it. That's if you can resist the urge to eat it, of course.

Getting down to business, I used Dsnyder's recipe to start off with and then adjusted it just a bit by replacing some of the flour with spelt:

1. The starter is dissolved into the water and then the flours are added and mixed thoroughly. I used my hands to make sure all the flour is incorporated properly.

3. Mix the flours with the water and leave to autolyse for 30 minutes. Add in the stiff levain and salt and mix thoroughly until all the flour is incorporated and the gluten is moderately developed (window pane test).

4. Bulk fermentation: 2:30 hrs (my kitchen was quite hot) with SF after each 45 minutes

5. Pre-shape the loaves and leave to rest for 15 minutes

6. Shape them and place them in well floyred bannetons and keep them refrigerated for 10-12 hours

8. Open the oven door and leave the loaves to rest in the cooling oven for 5 minutes more

9. Remove the loaves from oven and adore them. :)