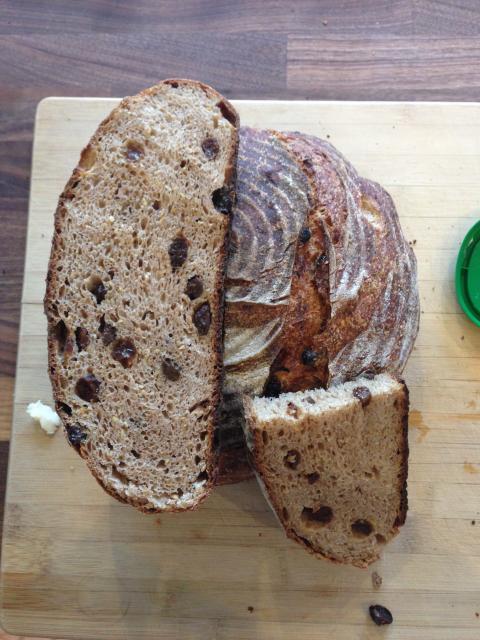 I've mainly been working on my high hydration country loaf (based on Tartine, but with tweaks for our cold kitchen + weather) but this week my wife bought a loaf of Raisin/sunflower seed bread from the co-op and then asked if I could make something like it. A Challenge! I found a recipe for a sunflower/flaxseed loaf in Tartine 3 and thought since I don't have sunflower seeds, but did have raisins, I could soak both and add to the same base dough.
The dough was mostly whole wheat, and unfortunately I cant find high extraction flour (anyone have any tips or good sources in NY?), so I tried the trick of sifting whole wheat through a fine sieve.

After the first 2 folds I added
110G Flaxseed
140G Raisins
Soaked over night in 220G Warm water (they absorbed all the water).

Bulk rise for 4.5 hours total, then proofed at warm room temperature for 4 hours before baking in dutch ovens.

I let them cool over night before cracking into them.

End result: Flavor is great and makes for a really good breakfast bread. Lots of whole wheat flavor and the seeds add a nice textural element. Slight sour flavor, but happy that its actually very mild. The crumb is actually really interesting. The bread is very soft and the crust is great, but the crumb is much less open then I was hoping for - consistent small pockets, but no big openings. A couple ideas:

- I think I didn't score deeply enough, so I'm guessing that that caused not a lot of steam to escape in the dutch oven, which reduced the oven spring (but not sure how much this resulted in the tighter crumb).
- Even though the dough was 85% hydration, I think that was actual low for the amount of whole wheat in the dough. If I do something like this next time, going to try using white whole wheat instead or really seek out the high extraction OR just use a greater ratio of white flour.

Next up, I'm going to go back to working on the basic country loaf. I also finally found some Einkorn flour at a local health food store, so going to try experimenting with that.